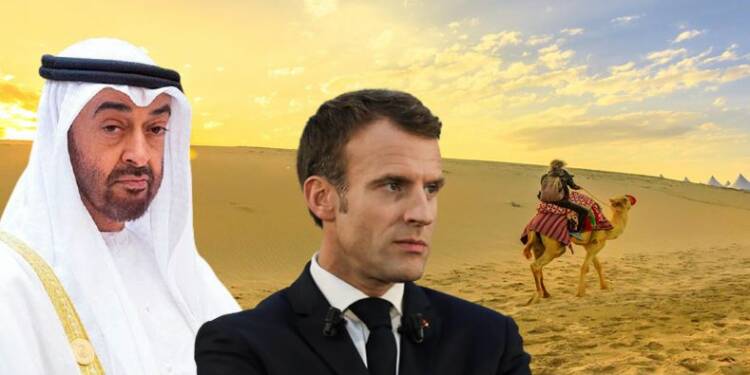 French President Emmanuel Macron is no longer willing to be tied by the foreign policy approach of the USA. Before the AUKUS misadventure by Joe Biden, France was really accommodative of Washington’s concerns and wanted to follow a united policy in areas of common interests. However, after realising that the Biden administration is okay with backstabbing its allies, Macron has decided to take things into his own hand. The Gulf tour of the French President early this month saw a wave of geopolitical re-balancing in the region, as Macron became one of the first western leaders to meet with Prince Mohammed (MBS) in the kingdom since Saudi journalist Jamal Khashoggi was killed.

Recently, Emirati officials told Reuters that the UAE had already informed the US about its decision to suspend discussions for purchasing F-35 fighter aircraft, along with other defence equipment, under a $23 billion deal. This was a follow-up to the United Arab Emirates (UAE) placing an order for 80 Rafale fighter jets and 12 military helicopters, strengthening economic and diplomatic ties with France through a 17 billion euro ($19.20 billion) arms purchase. This proved that the UAE is now entirely on France’s side.

Lebanon’s Parliament Speaker, Nabih Berri, said that his country is under siege amid a diplomatic crisis with Gulf countries, which lays out how MBS is working with Macron to remove Iranian influence in Lebanon.

France and Saudi Arabia coming together & the Lebanon question:

MBS, the Saudi heir to the throne who fell out of favour with the west after the assassination of Saudi journalist Jamal Khashoggi in 2018, has also rediscovered his stride by receiving a prominent western leader at his home.

No one expected Lebanon to be reinstated on the Saudi agenda, or for Riyadh to display a readiness to aid the country in its current state. The meeting between French President Emmanuel Macron and Saudi Crown Prince Mohammed bin Salman early this month, however, marked a watershed moment in Lebanon’s shaky relations with Riyadh. French President Emmanuel Macron has apparently succeeded in his strategy to re-advocate for Beirut by getting Lebanon back on track with Riyadh, at least as a matter of Saudi lip-service for the time being.

The Saudi and French leaders have agreed that the Lebanese government must implement extensive reforms, particularly to adhere to the Taif Agreement, which ensures Lebanon’s national unity and civilian peace. The agreement also said that Lebanon must not be used as a launchpad for terrorist attacks that threaten the region’s security and stability, or as a source of narcotics trafficking. And to make sure that this objective succeeds, the Iranian proxy in Lebanon, that is Hezbollah, should be taken to task.

Background of the Lebanon-Gulf crisis:

The kingdom believes that Lebanon, or at least the political majority in power, has abandoned its Arab heritage and has given Hezbollah the free rein for a long period. Riyadh accuses the group of aiding the Houthis in Yemen’s civil conflict and posing a threat to Saudi and regional security.

Relations between Lebanon and the Gulf countries have strained as a result of the controversial statements made by former Information Minister George Kordahi on the Yemeni war before his appointment to the new Lebanese cabinet. Saudi Arabia, the United Arab Emirates, Kuwait, and Bahrain all recalled their ambassadors from Lebanon, angered by Kordahi’s remarks.

Kordahi resigned from his office on December 3 in order to settle the diplomatic spat with the Gulf countries. Lebanon is attempting to resolve its diplomatic conflict with the Gulf, despite the country’s dire economic situation, which includes gasoline and medical supply shortages.

However, Macron was successful in bridging the gap and opening the door for normalisation of ties with Lebanon as well as corner Iranian proxies in the region. “We can expect the current restrictions to be lifted, but I don’t believe that Saudi Arabia would provide financial assistance unless new elements are made available,” on the Lebanese side, a French diplomat specializing in Saudi political affairs told L’Orient-Le Jour, on condition of anonymity.

The fact that Macron was able to diffuse the threat and start a normalisation effort between the Gulf and Lebanon goes on to show how impactful the short visit was for the French geopolitical ambitions.