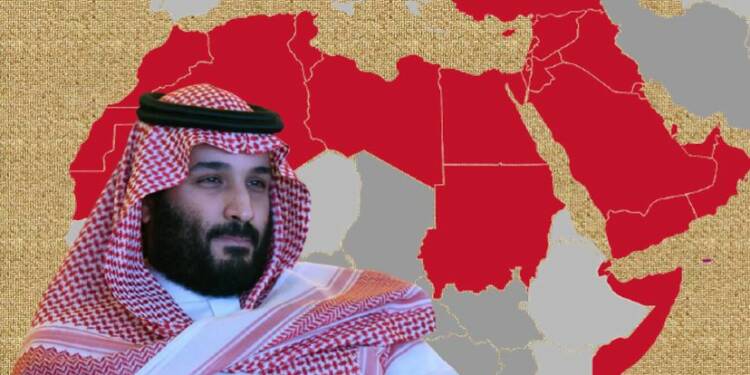 Since the Abraham Accords between the UAE and Israel were signed last year, the Emirates have taken over the driving seat of the Arab foreign policy. Saudi Arabia, the so-called undisputed leader of the Islamic world, has been dragged down by its radicals, who continue to oppose the normalization between Saudi Arabia and Israel. So, Saudis are now striving to storm back to the regional geopolitics, as Crown Prince Mohammed bin Salman (MBS) kicks off his tour of five major Gulf States.

MBS storms back to the regional geopolitics:

MBS has already arrived in Oman. From there, he will head to the UAE, Bahrain, Qatar and Kuwait, for holding talks focused on “regional cooperation and the threat posed by Iran’s nuclear activities”.

Interestingly, MBS had also held talks with French President Emmanuel Macron just two days prior to his tour of the Gulf States. It was the first time when MBS met any western leader since Saudi journalist Jamal Khashoggi was allegedly killed and dismembered inside Riyadh’s Istanbul consulate in 2018.

MBS, otherwise an active and shrewd diplomat, has been weighed down by Joe Biden’s political vendetta. Biden had vowed to ostracize him on the world stage during his political campaign last year. Just days after assuming office, President Biden released ‘damning’ documents establishing MBS’ direct involvement in Khashoggi’s murder.

In September, reports emerged that the Biden administration has declassified a 16-page FBI report tying the 9/11 hijackers to Saudi nationals living in the United States, hinting at the Kingdom’s role in the deadly terrorist attack on American soil. Hence, MBS’ tour of the Gulf States shows that he wants to break the shackles of Biden’s predatory foreign policy and rise back to the helm of the affairs of the Arab world.

MBS signals breaking shackles of his tumultuous past:

MBS’ visit to the five regional powers carries significant importance for Saudi’s foreign policy. It is his first foreign visit since the pandemic, and since the Saudi-led block eased their years-long diplomatic and economic isolation of Doha in January. His tour also precedes the annual six-nation Gulf Cooperation Council summit, which will reportedly be held in the Saudi capital of Riyadh on December 14. Hence, MBS is ensuring that Saudi’s leadership over the Arab bloc remains intact in the face of the UAE’s flaring diplomacy.

Why is Saudi Arabia feeling anxiety over the UAE’s rise?

The emergence of the UAE has started sparking unease in Saudi Arabia, which is now striving to jeopardize increasing cooperation between the Emirates and Israelis. It was recently revealed that Saudi Arabia attempted to exert pressure on the United Arab Emirates to sabotage a significant energy and water contract between Jordan and Israel.

According to the Axios website which cited two Israeli officials and another unnamed source, the Saudis had presented an alternate proposal that would have operated in cooperation with the UAE and Jordan, while keeping Israel out. Saudis are baffled at the UAE’s flawless diplomatic streak on the geopolitical map. Although this serves Saudi Arabia’s interests in the long run, the UAE’s wide strides also threaten Saudi Arabia’s unquestioned leadership over the Arab world.

The UAE shows its true potential after normalizing ties with Israel:

The UAE has emerged out as the driver of the Arab world’s foreign policy over the past few months, with the Arab diplomacy getting tremendous success on literally every front wherever the nation has involved itself.

The two biggest achievements of UAE’s diplomatic manoeuvres have been the warming relations with the Turks and Iranians. The UAE recently established a $10 billion fund to shore up Turkey’s sinking fortunes. Similarly, Iran is looking forward to red-ink its anti-Arab policies and is actively engaging the UAE to bury the hatchet. Iran’s top nuclear negotiator recently visited Abu Dhabi, where the two sides stressed improving and strengthening bilateral relations.

Iran’s rapprochement with the UAE, in particular, has raised red flags in Riyadh, whose foreign policy majorly revolves around isolating Iran in the Islamic world. With the UAE aggressively working towards nullifying the “Iran Threat”, Saudi Arabia’s Iran policy will soon be rendered outdated and dispiriting for other Gulf States.

Saudi Arabia has always been revered as the undisputed leader of the Arab world. It is believed that Prophet Muhammad was born here. It’s the place where Islamic civilization started, and Qur’an was revealed. But we live in an era where economic interests are often placed above all. And if the sprawling ties between the Arab states and Israel are any indication, the UAE’s enthronement as the leader of the Arab world is imminent.

Did the Chinese Communist Party really fight Japan off? CCP says so but the truth is far from it