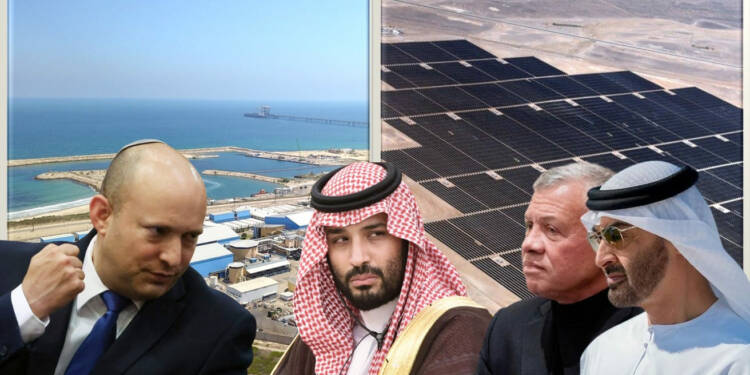 The pace at which the two Abraham accord countries, namely, the UAE and Israel are changing the geopolitical realities of the Middle East and North Africa region is a sight to behold. However, the reigning power of the region, Saudi Arabia is feeling left out of the decision making for the fast-changing regional dynamics. According to a report released on Wednesday, Saudi Arabia attempted to exert pressure on the United Arab Emirates to sabotage a significant energy and water contract between Jordan and Israel.

A huge solar power facility will be built in the Hashemite Kingdom to provide electricity for the Jewish state, while a desalination plant in Israel would deliver water to Jordan, according to an agreement mediated by the UAE earlier this week. The significance of the pact stems from the fact that it is the largest-ever cooperation agreement signed between Jerusalem and Amman since the former enemies signed a peace treaty in 1994. Not only this, but it is also the largest current renewable energy project in the Middle East.

The deal is significant in the larger stability of the region, however, given Riyad is in no form a party to it, makes them uncomfortable given they would not want to lose the position of the larger regional decision-maker.

The conflicting approach and Saudis left out:

According to the Axios website which cited two Israeli officials and another unnamed source, the Saudis had presented an alternate proposal that would have operated in cooperation with the UAE and Jordan, while keeping Israel out. The Emiratis, on the other hand, resisted the pressure, even though the signing of the agreement was delayed for several hours due to Saudi efforts to prevent it, according to the report. Saudi Arabia was not aware of the UAE-brokered plan until it was published in the media.

Riyadh, which, unlike the UAE and Jordan, has no formal diplomatic relations with Israel, was concerned that the agreement would jeopardise its crown prince’s aspirations to lead regional climate efforts. The arrangement was the latest result of the Abraham Accords normalisation pact, which Israel inked with the UAE last year under Trump’s auspices.

The Biden administration has also stated that it will build on previous agreements while emphasising that they are not a substitute for Israeli-Palestinian peace. Officials from Israel, the United Arab Emirates, and Saudi Arabia have all declined to comment on the claim.

The pre-eminence of Saudi Arabia in the MENA region:

Saudi Arabia has long been seen as the Arab world’s unchallenged leader. Prophet Muhammad is said to have been born here. It is the birthplace of Islamic civilization, as well as the revelation of the Qur’an. Mohammad bin Salman (MBS), the Kingdom’s current de-facto ruler, has rightfully continued this history, leading the Islamic Ummah by displaying his astute diplomacy to win friends and fortitude to face up to foes. However, today’s geopolitical realities are shifting, and emerging equations require MBS to take the lead from behind the scenes. While MBS would want to deal with things from behind the scenes, the overall ruling House of Saud has many other powerful people with differing perspectives from him and from time and again they try to sabotage the Saudi policies to further their world view, unfortunately, that includes the outcasting of the Jewish state of Israel.

Mohammad Bin Salman Al Saud (MBS) has shown how complex his approach is towards diplomacy and anyone who follows the region knows the Abraham accords would not have been possible without the support of MBS. He understands that the rising tensions in bilateral relations with the United States serve no long-term interests for the Kingdom. As a result, he appears to have transferred the baton to Abu Dhabi’s Crown Prince Mohammed bin Zayed (MBZ). Over the last few months, the UAE has emerged as the driving force behind the Arab world’s foreign policy, with Arab diplomacy achieving enormous success on virtually every front in which the country has been involved.

But, for other members of the ruling elite of Saudi Arabia, these developments seem to be sending Riyad into a corner while UAE takes the limelight and brokers more and more deals to stabilise the region and subdue the differences with prospects of accelerated economic development if the states cooperate.

Jordan is one of the world’s most water-scarce countries, and its water cooperation with Israel predates the two countries’ diplomatic relations. Although Israel is a hot and dry country, its advanced desalination technology has allowed them to sell freshwater. Future cooperation, according to experts, might help improve relations, which Jordan’s King Abdullah has described as “cold peace.”

Setting up symbiotic economic relationships in the region field by sectarianism and tribal amenities dating back centuries is the way forward, given it will create complex interdependence and will act as a deterrent for conflict escalation as well as encourage acceptance of diplomatic solutions. While MBS and MBZ understand this, the many old school royals in Saudi Arabia are not able to grasp the larger picture and in their smaller world view find their country left out of this significant development.