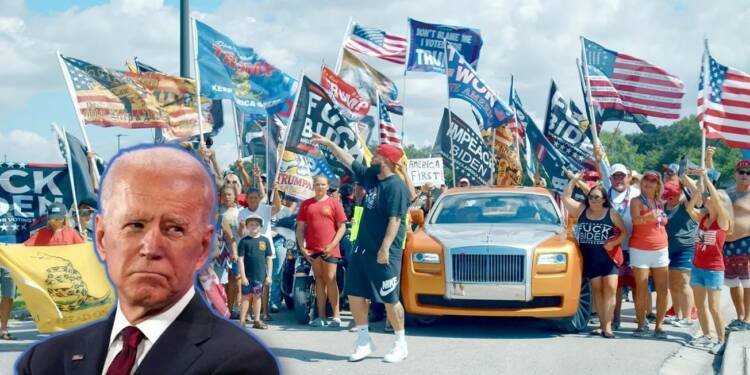 Is the US a healthy democracy? Poll data shows absolutely not! A lot of Americans are questioning Joe Biden’s legitimacy. Some fear frustrated and disappointed voters might even attempt to repeat the Jan 6 US Capitol Hill protests. Sadly, half of the Americans don’t believe in US democracy anymore. Their faith in the system has shaken like never before. Democracy is dying in the darkness; the darkness ushered in by Joe Biden’s disastrous policies following his assumption.

Axios-Momentive recently released a survey whose mind-boggling results appear to be narrating a harrowing tale of the US democracy:

The fact that half of the US voters question Biden’s legitimacy is the most concerning of all. This shows they strongly believe that the 2020 elections were rigged and former president Trump’s removal from the White House was unjustified. With each passing day, this belief among US adults is getting even stronger.

Biden’s policies over the past year have accumulated higher losses and lesser savings for ordinary Americans. Inflation is soaring at a mad pace. Covid-19 is wreaking havoc in the US once again. The crisis on the southern border is far from being resolved. The US has become a laughingstock for the world on the foreign policy front too.

Consider the issue of inflation in the US. The Consumer Price Index, which reflects the cost of everyday items, is up by 6.8% this year. Mind the fact that this is the biggest surge recorded over the past 40 years. Gas is up 51 percent, beef is up 20 percent, and furniture by 11 percent. High inflation means a higher cost of living and lesser savings.

Similarly, Covid-19 is on a rampage in the country. Joe Biden, who rose to the helm after despising Trump’s Covid policy, is now facing a tsunami of corona infections despite having “effective vaccines” in abundance. The US registered a whopping 1 million corona infections on a single day this Monday. Joe Biden has so far restricted India-made Covaxin from entering into the US markets. On the flip side, the administration is incessantly pressing the Americans to get jabbed with booster shots once again.

Similarly, the immigrant crisis at the southern border has become so acute that the Biden administration is now meekly resorting to deploying the Trump-era measures to cool down tensions. Joe Biden recently imposed a ‘Remain-in-Mexico’ policy which bars asylum seekers from entering the U.S. while immigration courts review their claims. Trump introduced this policy while being in office.

Read More: Texans have responded to Biden for creating an immigrant crisis in their state, in the boldest possible way

While on the foreign policy front, Biden has proved a disaster of epic proportions. Biden is nowhere close to Trump when it comes to standing up to China. Biden has weakened Quad; he has reneged on his promise of boycotting the China Olympics.

Biden still deems Russia as the biggest threat to the US. Afghanistan fiasco and the way how he miserably executed the AUKUS security deal with Australia revealed how US foreign policy under Joe Biden corresponds to the behaviour of a headless chicken.

Of course, any voter living under such an ignorant democratic system won’t approve of democracy and electoral mandate in a country. People are realizing they would have been better off under Trump’s presidency.

Biden’s approval ratings are at an all-time low. And no one seems to be paying heed to this democratic crisis in the US. No one seems to address the concerns of these dispirited voters. So, we can only expect a repeat of the Jan 6 styled protests in Capital Hill sooner than later.