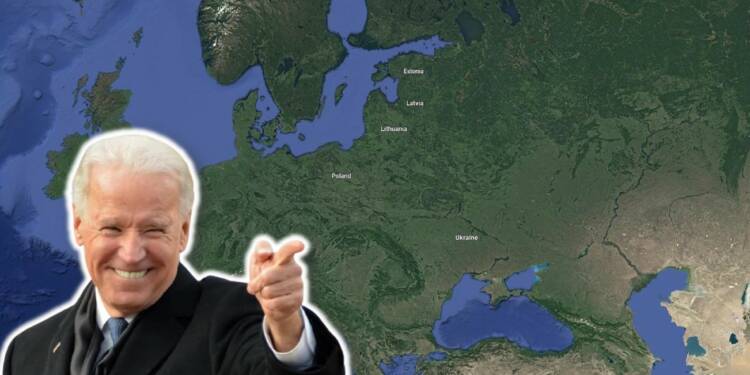 Joe Biden has perfected the craft of abandoning its allies at their worst moment after pushing them in the position itself. The year 2021 is full of such examples, be it Afghanistan, the Middle East, Taiwan to name a few. Now it is the turn for the Baltic nations to watch as the Biden administration throws them under the bus. A current administration official and two former US national security officials familiar with the planning told NBC News that the Biden administration is going into next week’s talks with Russia, unsure whether Moscow is serious about negotiations.

But if it is the case, US officials are ready to propose discussions on scaling back the US and Russian troop deployments and military exercises in Eastern Europe. What these people mean is that the Biden administration is ready to leave the situation which escalated to the tipping point because of Biden’s folly. It was Joe Biden who had emboldened Ukraine to challenge Russia and escalate the situation. And it was this very Joe Biden, who allowed the movement of NATO troops into the Baltic nations and Poland which brought them into this escalated conflict with Russia.

The upcoming meeting between Russia and the USA

The Biden administration was not long ago promising unprecedented penalties and other strong measures if Russia takes military action against Ukraine, with tens of thousands of Russian troops massed on Ukraine’s border. However, as US officials prepare for a series of high-stakes talks with Moscow beginning Monday, the administration is looking into measures to reduce tensions with Russia.

An administration official said the US is “compiling a list of alternatives for force posture changes in Europe to discuss with Russia at the meeting.” The US will be willing to negotiate specific steps if Russia appears inclined to consider reducing its presence in the region, according to the official. If Russia appears willing to discuss scaling back its presence in the region, the U.S. will be prepared to discuss specific moves, it means.

Biden emboldened Ukraine’s assertiveness and then abandoned it

Joe Biden’s modus operandi is this: stoke tensions between Ukraine and Russia, and when Moscow prepares its defences and plans for an offensive, leave Kyiv to fend for itself. Ukrainian Foreign Minister Dmytro Kuleba said Kyiv expects to be supported by Western military allies even if the United States does not send troops there. On his part, Joe Biden has categorically denied the prospect of sending U.S. troops to Ukraine to take on Russia.

Earlier last year as well, Biden used the heightened tensions between Kyiv and Moscow to get himself a meeting with Vladimir Putin in Geneva. In the run-up to that crucial meeting, Biden abandoned Ukraine, leaving it to fight its own wars. Again, late last year, Joe Biden met Putin to purportedly discuss rising tensions between Kyiv and Moscow. Subsequently, he denied sending American troops to Ukraine to directly aid the country in its fight against Russia.

Baltic states and Poland supported Joe Biden only to be abandoned

Poland and Lithuania joined Ukraine on 20 December to call for stronger Western sanctions against Moscow amid a Russian troop build-up near the Ukrainian border that has fuelled fears of an invasion. Not only this, a day before, as Russia deploys tens of thousands of troops to its border with Ukraine and published a wish-list of security guarantees to negotiate with the West, Lithuania, Estonia, and Latvia had expressed rising fear for their security and advocated for a more robust Western response.

However, all these attempts have resulted in no improvement in their security situation but have invited the curious eyes of Moscow. Now Joe Biden is planning a retreat from the region which will make Putin the real winner of these escalations. As the US and NATO forces are taken away from the region, which is being accepted, these countries will lose further in their security sphere. Something they may not have to face if Joe Biden decided to stick for them, not leave them at the cusp of war.