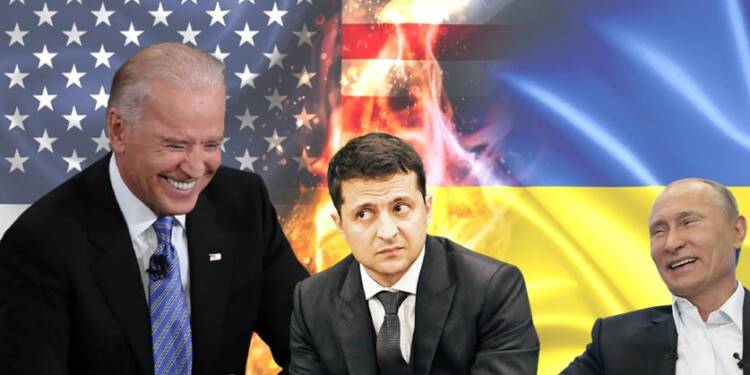 Ukraine has become a use and throw toy for the Biden administration. Joe Biden has an axe to grind with Russian President Vladimir Putin, and ever since he took office in January this year, the man has been working to achieve that goal. In the process, he is using the Ukraine card to threaten Russia. Vladimir Putin is anything but a novice. He knows what Biden intends to do to Eastern and Central Europe and how Washington is looking at ways to bring NATO assets and weapon systems right up to the borders of Russia. So, to protect its own interests, Russia is eyeing Ukraine.

Incidentally, Ukraine is also the country which Biden is using to strongarm Russia. But Putin is refusing to be strongarmed. Instead, conservative estimates suggest that Putin has deployed no less than 175,000 Russian troops on the borders of Ukraine – giving rise to a crisis in the region last seen only during the annexation of Crimea by Russia in 2014.

Joe Biden’s modus operandi is this: stoke tensions between Ukraine and Russia, and when Moscow prepares its defenses and plans for an offensive, leave Kyiv to fend for itself. Ukrainian Foreign Minister Dmytro Kuleba said Kyiv expects to be supported by western military allies even if the United States does not send troops there. On his part, Joe Biden has categorically denied the prospect of sending U.S. troops to Ukraine to take on Russia.

“We will be fighting this war by ourselves,” the Ukrainian foreign minister told investors in London. “We know how to fight. We do not need foreign troops fighting for us. But we will appreciate anything that can strengthen our army in terms of military supplies.” Biden has warned Putin that there would be “severe consequences” if Russia launches an attack on Ukraine. These consequences, however, will only be economic.

What is happening with Ukraine is simply déjà vu. Earlier this year as well, Biden used the heightened tensions between Kyiv and Moscow to get himself a meeting with Vladimir Putin in Geneva. In the run-up to that crucial meeting, Biden abandoned Ukraine, leaving it to fight its own wars. This time too, Joe Biden met Putin to purportedly discuss rising tensions between Kyiv and Moscow. Subsequently, he denied sending American troops to Ukraine to directly aid the country in its fight against Russia.

Also read: How Biden used Ukraine to his advantage and then dumped it the moment it served its purpose

Earlier this year,  Joe Biden seemed reluctant to let Ukraine into NATO, as prior to his meeting with Putin, he said Ukraine must ‘do more’. Essentially, Ukraine is time and again used as a bargaining chip by Joe Biden.

Vladimir Putin is least interested to talk to Joe Biden. But the American President would rather have talks with Russia than fight a war against it. So, by stoking tensions between Moscow and Kyiv, the Biden administration is repeatedly getting an audience with Vladimir Putin. Biden, after the one-on-one talk with Putin, said that he was hoping to announce “meetings at a higher level” between Russia and at least four NATO members in an effort to address the Kremlin’s complaints about the military alliance.

The talks would include “at least four of our major NATO allies and Russia to discuss the future of Russia’s concerns relative to Nato writ large and … bringing down the temperature along the Eastern Front”.

But these talks would not include Ukraine. Now, what does that tell you about the status of Ukraine in the eyes of Joe Biden? That’s right. Zilch.