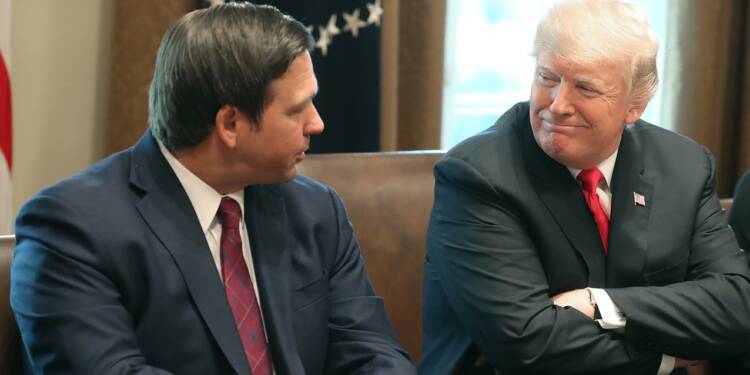 Apart from his ruthless takes on policy matters and the epic tweets that stormed Twitter, Donald Trump was among a few big names in politics who never shied away from locking horns with the vitriolic media houses of the west. It was evident from the fact that during his tenure at the top office, the white house press briefing room was akin to a war zone with the fiery exchange of remarks and repartees being a common song.

The same ‘hostile media’ as Trump dubbed it, is back at its deceptive best trying to dent the camaraderie between the former president Donald Trump and fellow republican and Florida governor Ron DeSantis. Having embedded in bitter plays of media in the past, Republicans never fell for the bait and kept the opposition squabbling over the stoicism at play.

It all begins with a statement by former president Trump as he said politicians who won’t say publicly whether they received a COVID vaccine booster shot are “gutless”, which some elite media tweaked and made it look like a jibe pointed at the Florida governor Ron DeSantis. The offhand remark from Trump was touted as the beginning of the bickering tension between the two, as Trump has previously predicted that if he runs for the White House again, DeSantis won’t run. That’s how Trump talks, cut no ice.

As it goes both Trump and DeSantis are immensely popular and widely accepted around the states. It may be partially attributed to the plummeting approval rating enjoyed by Joe Biden lately. Despite the remarks from Trump being clear and lucid, it required badly a touch of preposterousness from big outlets such as New York Times and Axios to put forth their sneaky counterattack towards the former president that they never grow weary on.

With news outlets celebrating the ‘jolted’ relationship between the two Republicans, and as articles came out in a flurry, Ron DeSantis shoving away his resistance did a podcast in which he said

“This is what the media does and you cannot fall for the bait. You know what they’re trying to do. So don’t take it.”

His take was firm, and he further lambasted the media for shifting the focus from the quagmire that Biden was currently in.

Trump in a similar response said “Ron has been very good. He’s been a friend of mine for a long time. It’s totally fake news.”

With the commotion of irresistible headlines hankering over Ron DeSantis is at play, the insiders within the republican camp refuse to go by the notion of ‘media created tension’. They see a hidden hand in Senate Minority Leader Mitch McConnell, who is arguably at loggerheads with Trump over the 2024 presidential run.

With DeSantis not ruling away from a possible run for the presidency in 2024, it is not uncommon for someone to drive a wedge between these two top candidates as assumed by many within the Trump camp.

John McLaughlin, working for Trump, said: “The Senate leader’s poll numbers aren’t as strong as President Trump’s. What McConnell can do is direct money and resources to candidates from Washington. That’s about it.”

On the other hand, it is no secret that Ron DeSantis has earned a liking within the masses, thanks to his unabashed take on China asking the then-president Trump to cut off all fights from the same and also his proper management of the COVID crisis during trying times which won accolades among many.

Whatever be the case, it never gives the media to run operations by pushing Fictional feuds that are far from existence. It is a fact that people love Trump, and they also love DeSantis. If asked to people, who would they suggest if not for Trump in 2024, the answer may be DeSantis. But the spin from the media was no accident.