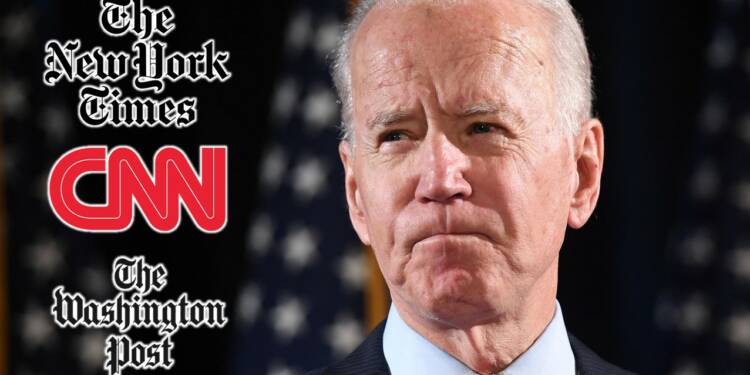 It is a known fact that the American liberal media is pro democrats and anti-republicans. It has been quite visible in their reports and coverage, that they openly support the Biden administration and hated the Trump administration. There has always been a deep nexus between the US government and US media, but it was never so evident and as much one-sided, as it has been in the past year. The Biden administration is completing its one year in office.

In the past year it seemed like the US liberal media like the NYT, CNN, WP etc have a covert relation and agreement with the Biden administration and democrats. Their coverage and reports seemed to carry a secret agenda in favour of the present government. But as the Biden administration is taking one bad decision after another and failing in all of their promises, there seems to be a shift in the tone of the US liberal media.

The old tone of the US liberal media:

From the day the election campaign started in the US, the liberal media houses like the New York Times, Washington Post, CNN etc have done completely biased reporting and coverage. They were busy just supporting Biden, telling why he is better, will be better, why he will win, must win, is winning and propagating Biden’s promises and policies.

On the contrary, they used to just bash Trump. They highlighted a few of his small failures and weaknesses in foreign relations and immigration policies. They never said a thing about his great successes and achievements like Abraham Accord, Effective actions on China, US first policy, Job creation etc. They never praised Trump for being the first president since Jimmy Carter to not enter US troops into a new conflict.

Also Read: No Trump, No Viewership: Donald Trump is out of power and American liberal media is struggling for views

The liberal media always mocked Trump, made fun of him and was at the forefront of his impeachment trial. They would also get rattled whenever Trump addressed them as ‘fake news’, like in the case of CNN. These media houses were getting high viewership and revenue generation in return for bashing and mocking Trump. But as soon as Trump was out of the office and got banned on social media platforms like Twitter, there was nothing left for these media houses to cover and thus their revenues and viewership started falling.

On one hand, the liberal media was busy praising and defending every failed policy and decision of the Biden government. On the other hand, shows like The Joe Rogan Experience, channels like Fox News and media houses like the wall street journal etc, were gaining popularity and increase in viewership and revenue generation because of their coverage and reports on the truth of Biden administration and democrats. These media groups brought forward the reality of all the promises, policies, and decisions of the Biden administration.

The rising inflation; mismanagement of COVID pandemic and vaccination drive; the rising vaccine hesitancy; the rise in crime rate and gun violence; the Afghanistan fiasco; the unstable relation with EU and countries like France, Japan, and India; the obsolesced NATO; US soft stance towards China; fading support towards Taiwan and US reaction on the recent Ukraine crisis, all these are among the biggest failures and blunders of the policies and decisions of the Biden government, that the liberal media covered with biases and irresponsibly.

The new tone of the US liberal media:

Recently there seems to be a change in the narrative and tone of the US liberal media. They have understood that as Trump is no longer in office to bring them the viewership and revenues that they once received by bashing and mocking him, they will have to change their stance on Biden to sustain and survive. It seems that they have finally accepted that the Biden administration has failed in almost every aspect and is among the worst administration in recent US history. They deeply also know that the Trump administration was way better and more successful than the present one. The change in their tone can easily be recognized by their statements and comments on the decision and policies of the Biden administration.

Here are some of the comments made by the liberal media in the recent white house press conference: “Battered White House searches for a comeback scenario,” said CNN. “White House plots a public reset as Biden agenda fails,” noted NBC News. “Why is Biden one of the most unpopular U.S. presidents?” asked the Guardian.

Here are the comments of the liberal media on Biden’s face-saving Afghanistan exit: “A bungled mess,” the Atlantic. “CNN turns on Joe Biden as Afghanistan actions are called a political disaster,” Newsweek. “As U.S. leaves Afghanistan, Europe sours on Biden,” The Washington Post.

Read More: There is something about Biden that the liberal media is not telling us, and it will end up hurting America in unimaginable ways