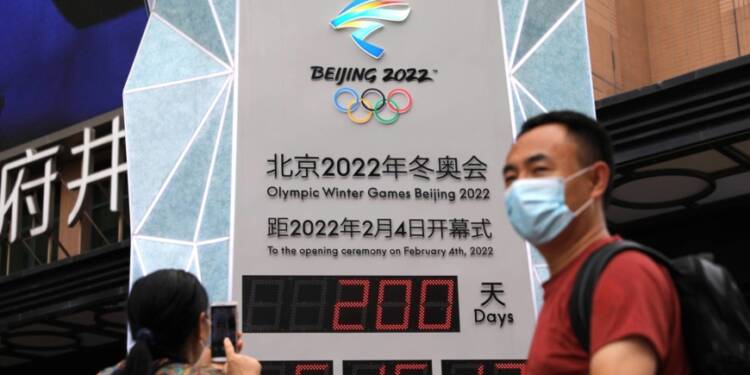 A woman uses her phone in front of a countdown clock showing 200 days to the opening of Beijing 2022 Winter Olympic Games, in Beijing, China July 19, 2021. REUTERS/Tingshu Wang

In older days it was rats and dogs out from the filthy alleys of china that turned your stomach ill (even if just going by the mere thought of consuming it). Now the baton has been passed towards plastic, lead, and other banned drugs in food production. That’s how a dismal grey country China is.

At the latest, prior to the winter Olympics, word has come to know about the Chinese food scandal, and countries from all quarters have now warned their respective athletes to be cautious enough to not consume any meat products from mainland China.

Amid mounting concerns surrounding the unhygienic food production in China, the World Anti-doping Agency (WADA) has issued a warning to athletes saying “only to eat at places given the all-clear by event organizers” and to “exercise extreme caution”.

WADA’s caution weighs significance since there are precedents of athletes getting victimized for banned substances in china after consuming meat products allegedly injected with contaminating drugs.

The danger relies not solely on contamination but also on the injection of Clenbuterol in meat products, widely known as lean meat extract. It is a meat powder commonly fed to pigs helping produce pinker meats and eventually cons consumers to believe in buying fresher pork than it is.

Albeit wallowing in banned substances, the Beijing market supervision administration has detected a variety of harmful substances including toxic pesticides in food products that Chinese farmers often add in fruits and vegetables to accelerate their growth. A shocker of a  video also has emerged showing farmers adding Sulphur dioxide to pools with beans sprouts to make them look whiter and fresher.

Thrown into a mix after the rising doping cases among athletes, the US anti-doping agency acted out sparing no time in giving caveats about wrong food choices and advised the team to have meat from only reputable sources such as the Athletes village and to never saunter in search for foods in the unsafe streets of China.

Even CCP distances itself from Chinese food

When more concerning evidence regarding Chinese treatment of athletes with harmful food products surfaces across news portals, it startles the sap out of anyone coming over the fact that the top officials of CCP enjoy food that has strict safety and nutritious standards, unlike the rest.

Back in 2005, the CCP established a food supply centre exclusively for the 96 top officials of the party where foods should meet the specific requirement for nutrition and be devoid of any chemicals, additives, or preservatives.

Right after the Shanghai Cooperation Summit of 2018 July, an article emerged in the popular Chinese social media platform WeChat placing the onus on the CCP to eliminate toxic food for its citizen. The news clicked a chord within the public and as a result, the article was quickly deleted by the authorities in a days’ time.

Beijing Winter Olympics remains CCP’s prized project and the party will do whatever it takes to subvert the accusation levelled against them. To this point, Beijing remains unclogged apart from the gelid assessment of CCP mouthpiece Global times whining over the “anti-China” forces at play. But the telling case of all remains the authorities choosing a country that is deteriorating in human rights record and doing diplomatic boycotts to conduct the celebrated winter Olympics. One would never know!