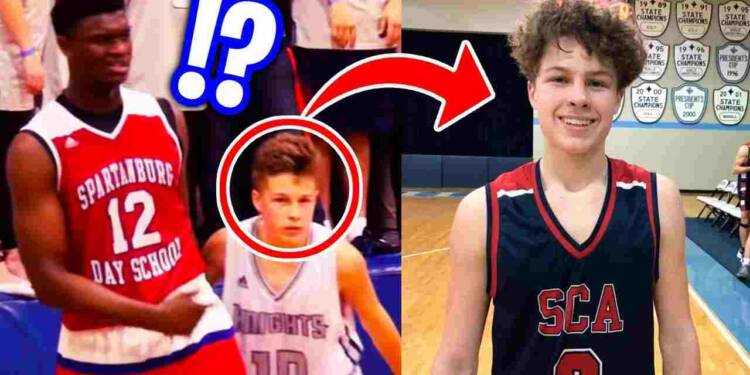 Bryson Bishop is a high school basketball player based in south California in the United States of America. His home town is Moore, South California. He is known for his defense against American professional basketball player for the New Orleans Pelicans of the National Basketball Association Zion Lateef Williamson. Bryson Bishop is a player of Oakbrook Preparatory School at Spartanburg, South Carolina.

How Bryson Bishop came into Limelight?

Coach Clay Keim had his squad practise a box-and-one defense in preparation for their game against Zion, and Bryson Bishop was the one who had to guard Zion. The video of his encounter with Zion went viral back in 2017. And Bryson Bishop is having a second fame this week after Zion commented on the video.

On March 5, 2021, Bishop’s tale was featured on ESPN’s SportsCenter, and a video of his attempt to protect Zion has been viewed over 6.5 million times on YouTube.

Bryson Bishop joined twitter in 2016 and has been followed by only over 1300 people. He is active on twitter and tweets and retweets frequently. His tweets are mostly based on basketball. He can be reached at @B_P_B_2 on twitter.

On his YouTube about Bryson Bishop has mentioned “Basketball is much more than just a game, it’s a gateway to endless opportunity. It has done many great things for me and my life such as, teaching me life lessons, taking me places I never thought I would go, and allowing me to meet people I never expected to meet.

But what I’ve learned most from this game is that it has given the biggest opportunity of them all, and that is to glorify the One who gave me the ability to do it, and His name is Jesus. The purpose of this channel is to simply make videos about doing what I love while living for the One who loves me. “

He is 6’0″ Point Guard, also called the one or the point, is one of the five positions in a regulation basketball game. He is now Spartanburg Christian, SC 2021 and his The grassroots team is Upward Stars Watson. His AAU Team is Spartanburg Thunder. The Amateur Athletic Union is a sporting organization for young people. To put it another way, groups of players form independent teams that compete against other teams in AAU competitions.