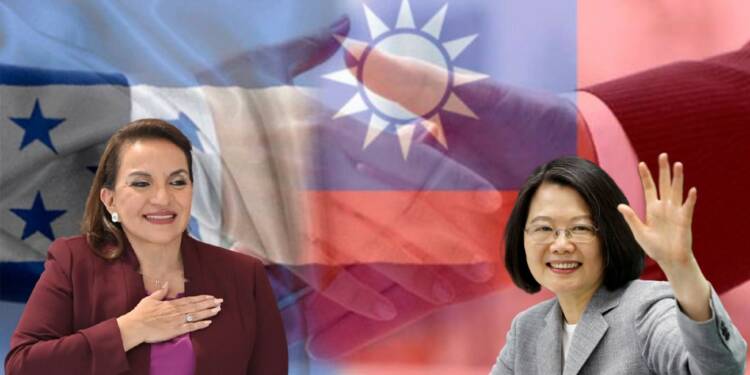 Taiwan since the betrayal in the 70s has sustained itself with help of astute diplomacy and by one-upmanship. Now, Taiwan and the Tsai Ing-wen administration has shown why this small Island nation should never be underestimated. Before the presidential elections in Honduras, Xiomara Castro of the opposition Libre party had made a manifesto pledge to foster official relations with Beijing.

However, courtesy of the backchannel diplomacy as well as the overt support to Honduras, Taiwan succeeded in mitigating the Chinese Communist Party’s diplomatic aggression in the Central American country. President-elect Xiomara Castro expressed gratitude for Taiwan’s support on Wednesday after meeting with Taiwan’s vice president, sending a reassuring message to Taipei, which had been concerned about losing an ally.

And not only this, but the Taiwanese were also able to score another diplomatic victory by putting the US Vice President in a position where the Biden administration has come out in open violation of the One-China policy. This is significant because, unlike Donald Trump, Joe Biden was placating China by constantly reminding Beijing that the US abides by the one-China policy.

Read more: Honduras is about to turn into a Chinese colony and Biden is to be blamed for it

Taiwan holds its ground and grabs the dragon by its tail

Honduras is one of only 14 countries with formal diplomatic relations with Chinese-claimed Taiwan. During her election campaign, Castro suggested that she leave Taipei for Beijing. China has increased pressure on Taiwan to diminish its international presence, claiming that the democratically run island is Chinese territory with no right to state-to-state ties. Castro commended Taiwan in statements to Taiwanese media after meeting Vice President William Lai, who is in Honduras for the presidential inauguration.

“The people of Honduras are always grateful to the people of Taiwan for the support that they have always given us,” she said, in a video clip carried by Taiwan’s official Central News Agency. “We have worked together hand in hand for many years and hope to maintain this relationship.”

According to Taiwan’s presidential office, Lai asked Castro to visit Taiwan and informed her that because both Taiwan and Honduras have close ties with Washington, he hoped the three parties could work together to solve the country’s difficulties.

At the inauguration of the new Honduran president, the US and Taiwanese Vice Presidents had a brief talk, a rare interaction that is extremely significant and likely to exacerbate Beijing’s concerns with Washington. The United States, like most countries, has no formal diplomatic relations with Taiwan, despite its significant political and military backing for the island, which is one of the main sources of Sino-US tension. In Honduras, US Vice President Kamala Harris met with her Taiwanese counterpart, William Lai, to discuss their shared interest in Central America and the US government’s “root cause” migration approach.

After a brief conversation between Vice President Kamala Harris and her Taiwanese counterpart in Honduras, China’s foreign ministry stated that the government has consistently rejected any type of official cooperation between the two countries. Zhao Lijian, the spokesman for the Ministry of Foreign Affairs, remarked during a daily news briefing in Beijing.

China tried a Nicaragua in Honduras and failed

Media reports suggest that Taiwan’s aggressive diplomacy, backed by the US, prompted Castro to relinquish ambitions of fostering the Honduras-China ties. Taiwan had warned Castro of China’s “Fleshy and False” promises, which often lead nations to the vicious circle of China’s debt-trap diplomacy.

Even Taiwanese President Tsai Ing-wen hurried to the frontier and congratulated Castro for her landslide victory on Wednesday. “I look forward to working with you to benefit the people of our countries & strengthen longstanding Taiwan–Honduras partnership,” Ing-wen said on Twitter. Castro retweeted the message with a terse reply: “Many thanks President Tsai Ing-wen.”

After the sinking of the Venezuelan economy, Honduras has witnessed a deep slump in its own economy as well. Establishing ties with China is always an easy way out of the economic woes for these tiny Caribbean nations.

However, the events unfolded in the Solomon Islands also appear to have played a big part in making Honduras reverse its stance. Solomon Islands’ central government’s ‘switch’ of diplomatic relations from Taiwan to the PRC (People’s Republic of China) in 2019 has had enormous destabilising consequences. Now, these developments following the partisan politics supported by Beijing has turned the island nation into a no-go zone for China.

All these factors may have weighed in, for the small Central American nation, but the biggest takeaway from these developments is the fact that not only was Taiwan able to keep its relations with Honduras intact – but it was also able to play its cards right with the US Vice President Kamala Harris. This made sure that the delicate balancing act by Joe Biden vis a vis One-China policy is no longer possible. The events that transpired tell us how Taiwan has mastered the craft of diplomacy in the 21st century.