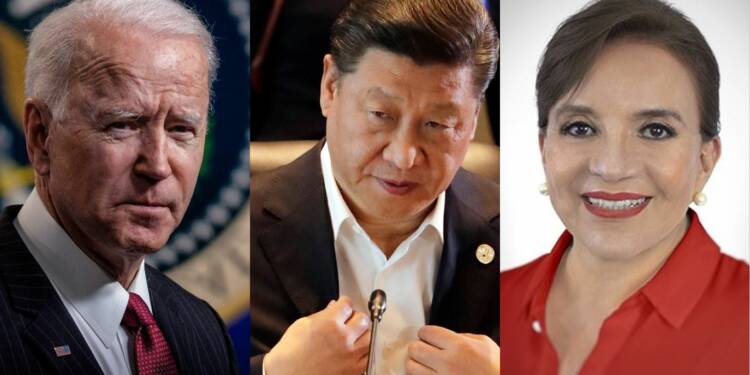 Joe Biden as the President of the United States has been the most beneficial asset to the Chinese Communist Party. His actions have automatically undone many checks that his predecessor Donald Trump had placed, and he is making sure that Beijing need not put any effort to dismantle US supremacy. Not only is he a danger to the USA, but his actions have also started having an adverse impact on the US allies too. Honduras’ main opposition party pledged to switch diplomatic recognition to Beijing, prompting Taiwan to warn the Latin American country against China’s “flashy and false” promises. This comes after the US ignored the vaccine requirements of Honduras.

Xiomara Castro, a presidential contender in Honduras, had stated that if she is elected in November, she will “immediately open diplomatic and commercial relations with mainland China.” The opposition party’s tilt towards China has picked up pace because of Joe Biden’s negligence in taking care of its neighbourhood and provide them with essential supplies and vaccines, which the US delayed doing. And this provided the opposition with the reason to ally with China instead of the US and stop diplomatic ties with Taiwan.

Honduras is one of just 15 nations with formal connections with Taiwan, which China claims as part of its territory awaiting reunification, which might be enforced by force if necessary. Since President Tsai Ing-election wen’s in 2016, Beijing has increased pressure on Taiwan because she rejects Beijing’s position that the self-ruled democratic island is part of China.

Taiwan helps its allies regularly and goes above and beyond in its efforts. However, Taiwan itself is struggling to get vaccines for its citizen, how can it help all its allies in a short time. In such a situation normally, the US should have understood the severity, but it didn’t and came late to the picture.

Democrats and the Northern Triangle countries

Central America does stay conscious of how the US governments and corporate interests had colluded in the early twentieth century “Banana Republic” era in the region to stage regime changes and back coups for installing friendly regimes. All three “Northern Triangle” nations witnessed how the US got deeply involved in the internal affairs of these countries to keep favourable regimes and American corporate allies in power.

In fact, the US used to fund favourable regimes and political parties in countries like Guatemala, El Salvador, and Honduras well into the 1980s. In the case of Nicaragua, the US had gone as far as occupying the country between 1912 and 1933, again for the purpose of protecting its business interests in the country.

Let’s be clear- the US is a cause of many problems happening in these Central American nations especially Guatemala, Honduras, and El Salvador. And Democrats have a large share of the blame. The US has been getting too far involved in these countries and trying to control them in a condescending manner, which does revive the entire history of deep American military intervention. Now, in addition to these problems, the Biden administration did not care for the wellbeing, and this has made the opposition confident enough to do the bidding of China.

Late response from the Biden administration

Concerns that China is leveraging access to vaccine supply to persuade countries to remove diplomatic recognition of Taiwan have prompted the Biden administration to prioritise sending Covid-19 vaccines to Latin America. About the 80 million vaccines that Joe Biden has promised to deliver to other countries by the end of June, a senior US official told the Financial Times, “Latin America will be one of the priorities.”

Honduras, one of just 15 countries that recognises Taipei over Beijing, has indicated that it may have to change its attitude in order to gain access to the Chinese vaccine supply. Taiwan is claimed by China as part of its territory. The slow-paced approach by Joe Biden has only worsened the problem. Honduras may soon turn into a Chinese colony and Biden is to be blamed for it.