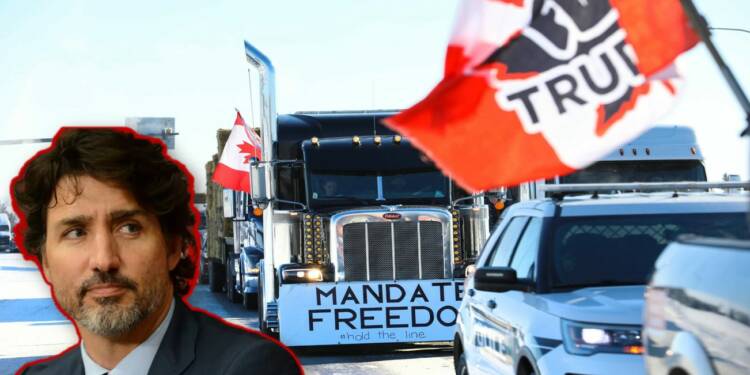 Karma gets to you, slowly but surely. Canadian Prime Minister and liberal heartthrob Justin Trudeau has found it the hard way in the last week. Reportedly, after Truckers and their ‘Freedom Convoy’ started the protest against the unruly vaccine mandate of the liberal government, Trudeau went into hiding and is now giving signals that he may take action against the Truckers.

At least 100 truckers are currently blocking the Canadian border between Alberta and Montana. Agitated by the blockade, Alberta Premier Jason Kenney called for an end to the blockade whilst insinuating that Canadian police may be taking action.

Kenny said in a statement, “If participants in this convoy cross the line and break the law, I expect police to take appropriate action,”

The blockade of the Coutts border crossing violates the Alberta Traffic Safety Act.

It is causing significant inconvenience for lawful motorists and could dangerously impede movement of emergency service vehicles.

This blockade must end.

Moreover, according to a BBC report, Trudeau has refused to meet the protestors. He said, “This is not the story of our pandemic, our country, our people, My focus is standing with Canadians and getting through this pandemic.”

As reported by TFIGlobal, the truckers of Canada have been protesting the ‘undemocratic’ Covid-19 policies of Justin Trudeau including mandatory vaccination for truckers entering Canada through the US-Canada border.

Dubbed the ‘Freedom convoy,’ it has amassed support from all sections of the public including prominent personalities like former US President Donald Trump Jr, podcaster Joe Rogan and comedian Russel Brand.

And what comes as poetic justice for Trudeau, farmers in Canada have also started to join the truckers in the protest against the mandate. Videos shared on social media show farmers in their tractors marching onwards Ottawa to join the blockades and protests.

The Canadian farmers are now joining the 50,000 Canadian truckers in their convoy for freedom towards Ottawa. #Canada #CanadaTruckers #TruckersForFreedom2022 #ConvoyForFreedom
🇨🇦pic.twitter.com/U3H1tuwcGo

Wearing balaclavas and braving the temperature which has plummeted to minus 21 Celsius (minus 6 Fahrenheit) in some areas, the truckers and farmers are standing resolutely in defiance. There has been no harm to public property and yet the Canadian government is issuing threats of taking police action.

Trudeau was preaching the Indian government

It was not long ago that Trudeau was preaching to the Indian government to practice restraint on the hoodlums of the fake farmer’s protests who were torching and creating unrest in the national capital through riots and destruction to the public property.

At the time, Trudeau succumbed to the Khalistan lobby, while one of his alliance partners Jagmeet Singh tweeted, “No Farmer, No Food’

And yet when it comes to respecting the personal liberty of his country’s truckers, the liberal mascot is chugging hot chocolate, hiding behind a couch in an undisclosed location.

If Trudeau orders any police action on the Truckers, it could start a domino effect that may have serious repercussions for the economy of Canada, especially in the current delicate economic market. The truckers are the backbone of any country and if they are not allowed to practice their beliefs freely, it may spell doom for Trudeau’s future.

Trudeau’s second innings in the parliament has been manufactured by a razor-thin margin and if the liberal PM continues to enrage the Trucker community, he could kiss his job a sweet goodbye.