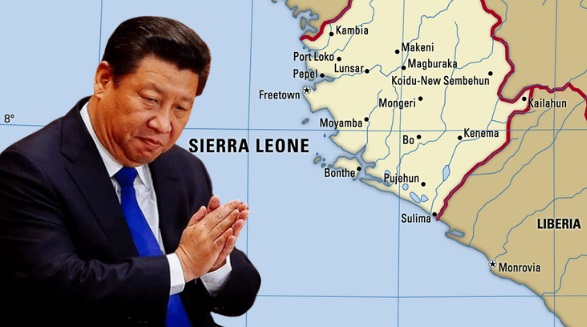 Tombo, a port city in the Western African nation of Sierra Leone, is looking at a fervid economic crisis in the eye. The city’s economy is heavily dependent on the fisheries; but fishermen nowadays are getting debts and violence as a reward for their brutal, 14-hour day at sea. Resources are disappearing, fishermen are suffering and families are starving. People of the city say problems began when China came in.

What role does the fisheries sector play in Leone’s economy?

The fisheries sector plays a vital role in Sierra Leone’s economy. It represents 12% of the economy. It employs 500,000 of the nation’s eight million population. The sector is the source of 80% of the population’s protein consumption. You see, any factor impacting the fisheries becomes a national issue in no time. This is a matter of life and death for millions of Sierra Leone people.

And that’s why people living in Tombo city are rising up in arms against China. Chinese fishermen have nearly usurped and seized Leone’s marine resources, pushing poor fishermen to the cusp of impoverishment and starvation. About 40% of industrial licenses are owned by Chinese vessels. They pay negligible fees for these permits, underreport their catch and overfish Leone waters.

China came and unleashed the crisis

Chinese vessels have brought other problems as well. Illegal, unregulated and unreported (IUU) fishing costs Leone $50 million a year. IUU fishing accounts for nearly half of the total fish catch in Leone waters.

Last year, a joint operation by the Sierra Leonean navy and the conservation organisation Sea Shepherd Global led to the arrest of five foreign-owned fishing vessels in two days. Interestingly, two China-flagged vessels were also caught fishing in Leone waters without a license.

Those who protest Chinese trawlers most often end up facing violence and slurs. Alusine Kargbo, a 34-year-old mackerel fisherman was quoted by the Guardian as saying that trawlers’ crews threw boiling water at him when he confronted them overfishing in areas where trawling is prohibited.

Another fisherman, Ibrahim Bangura, said confrontation with Chinese trawlers has become commonplace now. “There’s so, so many of them,” says Bangura. “They disturb my property, trash my nets. And if you try to stop them, they will fight you.”

How China ruined the fisheries of Western Africa

China is consistently ranked as the worst offender for IUU fishing in a global index of 152 countries. Across West Africa, illegal fishing has emerged as the biggest threat to the livelihood of millions of fishermen. A study in 2017 found that Sierra Leone, Senegal, Mauritania, the Gambia, Guinea-Bissau and Guinea lose $2.3bn (£1.7bn) a year due to IUU fishing, which amounts to 65% of the legal reported catch.

Stephen Akester, an adviser to Sierra Leone’s Ministry of Fisheries and Marine Resources between 2009 and 2021, said that overfishing could have devastating consequences for the Leone fishermen. He said, “The Chinese fleet has been taking the profits of the fisheries for 30 years and the impact on fish stocks has been terrible.”

This episode is now stoking anti-China sentiments in the country. This also became evident last year when a $55 million deal to sell 250 acres of pristine beach and rainforest to China had caused massive outrage among conservationists, human rights and animal welfare groups and local landowners in Sierra Leone.

They said the project would “destroy the pristine rainforest, plunder fish stocks, pollute the marine environment and five individual ecosystems that are fish breeding grounds and support endangered bird and wildlife species.”

Read More: Africa is all set to pull the plug on China’s plan to loot the continent’s resources

China staring at a retreat from Africa in the eye

China’s debts and investments in the African continent have been turning sour. Chinese ambitions of colonising the continent too, as a consequence, are taking a massive drubbing. According to the John Hopkins University School of Advanced International Studies’ China-Africa Research Initiative, between 2000 to 2019, China signed 1,141 loan commitments worth $153 billion with the African government and their state-owned enterprises.

According to a report by The Singapore Post, China is increasingly finding itself being cornered by African countries on investment-related matters with some of them cancelling contracts with Chinese companies as their “shoddy” work has become a source of tension for the ruling dispensations in several nations across the continent.

Countries like the Democratic Republic of Congo, Sierra Leone, Ghana and Kenya have begun cancelling Chinese projects, and Beijing is practically running helter-skelter for cover, as its expansionist dreams get jeopardised by African nations despite it having crushed them under the weight of massive debts. Meanwhile, a coup in Guinea threatens to bring China’s aluminium industry to a standstill.

All in all, African nations are now fast realizing the cost of over-reliance on China the hard way. Chinese money isn’t easy; instead, it costs nations their sovereignty and self-respect. Tombo is just the beginning.