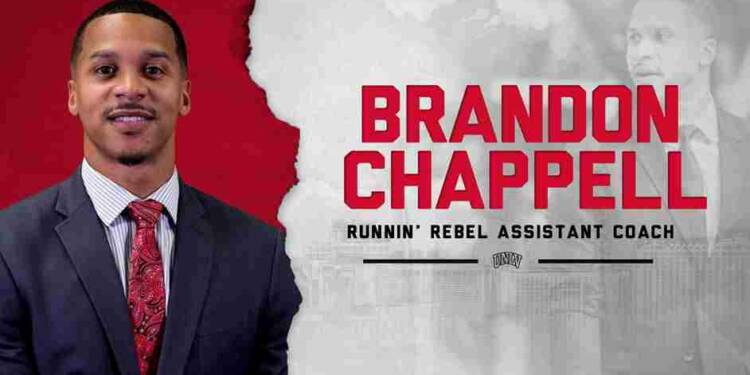 He lives in Las Vegas, an internationally renowned major resort city, known primarily for its gambling, shopping, fine dining, entertainment, and nightlife. Brandon Chappell arrived in Las Vegas after four years on the bench with the Cardinals, where he was also a standout player.

Brandon Chappell earned a bachelor’s degree in business administration-marketing from Lamar University in 2006. In 2016, he graduated from NAU with a master’s degree in educational leadership. Chappell was also a standout at Ozen High School in Beaumont, helping the Panthers to the 4A state championship game. Kendrick Perkins, the 2008 NBA Champion, was a teammate of his at Ozen (Boston Celtics).

For the first time in seven seasons, Chappell helped lead Lamar to a 20-win season. This past season, he also coached the Southland Conference’s Defensive Player of the Year and helped several Cardinals gain first-team all-conference honors.

Prior to returning to Lamar, the Beaumont, Texas native spent one season as an assistant coach at Arkansas-Fort Smith (2016-17). The Lions won the Heartland Conference regular season and tournament championships, as well as making an NCAA Division II tournament berth. Brandon Chappell was a part of three Heartland Conference All-Tournament selections at Arkansas-Fort Smith, including the tournament MVP. Two all-conference selections, a first-team All-South Region selection, and a NABC First-Team All-American rounded out the team.

During Kruger’s two seasons as an assistant coach at Northern Arizona (2014-16), Brandon Chappell worked as a graduate assistant and recruiting coordinator (2014-15). The Lumberjacks set a school record for wins and finished second in the 2015 CollegeInsider.com tournament when Chappell was on the team. Three All-Big Sky players have come out of the programme, including the 2015 Defensive Player of the Year.

After working with Nike Basketball Camps, Chappell began his collegiate coaching career as an assistant coach at Armstrong State in 2013-14. (2012-13).

The UNLV Runnin’ Rebels are a men’s basketball team that competes in the Mountain West Conference of the National Collegiate Athletic Association, and they play in the Thomas & Mack Center on campus.

UNLV had the fourth-best winning percentage (.712) in Division I history as of 2009, trailing only Kentucky, North Carolina, and Kansas but ahead of UCLA and Duke. With a 63.5 winning percentage in the NCAA tournament, UNLV is 33–19 all-time. Since the 1984–85 season, ESPNU designated the programme the ninth most prominent collegiate basketball programme in the country in July 2008.