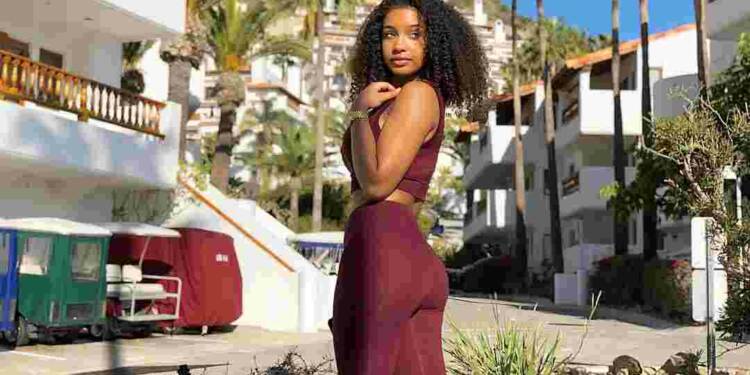 Corie Rayvon is an American model most known for her relationship with Khalil Underwood, a web video celebrity. Corie Rayvon has her own YouTube channel where she uploads beauty videos, reactions, pranks, and challenges.

Corie Rayvon has been followed by over 100k people on twitter and she is very active on the platform. Her twitter account can be reached at @CorieRayvonn. She joined twitter in 2009 and has been active since then.

However, she is more popular on Instagram and her account has been followed by nearly a million people.

She also graduated six months early from Pearland High School. She also became friends with singer Jilly Anais after graduating. She started nursing school in 2015. She also wanted to be a pediatrician or a veterinarian when she was younger. Model Amber Rose, as well as singers Zendaya, Beyoncé, and Rihanna, are among her sources of inspiration.

She was known as “Poopie” or “Poopie Doop” as a child. She is of mixed ancestry, with roots in black, white, and Hawaiian cultures. After junior high school, she became interested in makeup. As a result, her sister did her prom night make-up, which she adored.

Corie Rayvon was born on July 2nd, 1996, in Houston, Texas, United States. She will be 24 years old in 2020, and her zodiac sign is Cancer. In 2015, she relocated to Los Angeles to pursue a career in modeling and acting. Furthermore, with the exception of her mother, who is from California, the majority of her family members are from Texas.

She is a dog lover to the core. She and Khalil used to share a dog. She is a huge fan of Mexican cuisine. Sausage pizzas are another favorite of hers. She considers herself to be a quiet nerd. Before going to bed, she enjoys reading. She enjoys documentaries.

After moving to Los Angeles in 2015, Corie launched her profession. She left her birthplace to pursue a career as an actress and model. Corie Rayvon has modeled for Loungewear, appeared in advertising for Sugar Bear Hair and BrighterWhite teeth whitening, and is the Icon Swim brand ambassador. However, she later decided to pursue a career in social media.

She is a close friend of Jilly Anais, an emerging musician and social media celebrity with whom she launched a joint ‘YouTube’ account on January 9, 2016. The channel, dubbed ‘Bestfriend Diaries,’ has fashion and beauty stuff, as well as challenges and pranks.

However, the channel has a small number of videos and has not been able to attract a large number of subscribers. On May 14, 2016, she launched her first solo YouTube channel, and a week later, she uploaded her debut video, ‘My Curly Hair Tutorial.’

Corie Rayvon went on to say that she would be posting reaction videos, challenges, pranks, and storytimes in the future. Her fans adore her stunning appearance and lovely hair. Over 603 thousand people have subscribed to the channel. She had reached a stage in her career when she was no longer interested in recording pranks and challenges and wanted to go out and try new things. As a result, she shifted her focus to collaborations.

Khalil Underwood is a YouTuber and recording artist from the United States. He is well-known for his YouTube channel KhalilsWorld, where he uploads music videos, skits, and other amusing entertainment. He has recorded numerous original singles as a performer, including “All About You,” “Get Away,” and “Be Mine.”