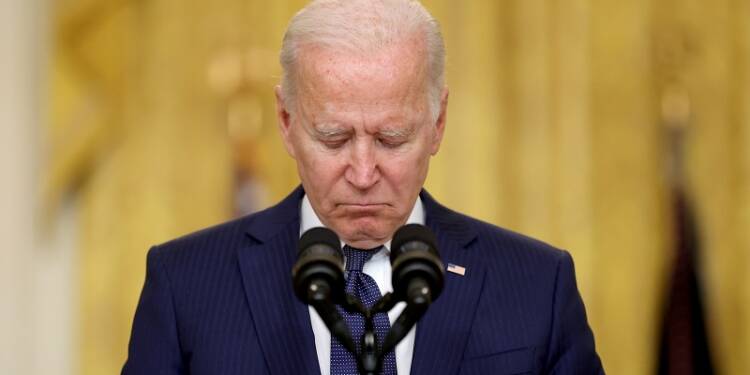 Joe Biden reacts during a moment of silence for the dead as he delivers remarks about Afghanistanm August 26, 2021. REUTERS/Jonathan Ernst

Joe Biden has remained focused on the mission of repealing Trump era achievements. Former President Donald Trump issued a variety of executive orders, including ones aimed at social media platforms’ moderation, practises, protecting Americans from “overcriminalization” through legislation, and establishing the “National Garden of American Heroes,” among other things.

However, in his efforts to undo the policies of Donald Trump, he has ended up eroding the social contract of the state with its people. More police officers have been killed in the line of duty under President Biden’s leadership than in prior years since 1995, and law enforcement nonprofit wants the president to start speaking up.

According to the FBI’s law enforcement officers killed in action (LEOKA) data, while officer line-of-duty deaths reached record highs beginning in 2020 as a result of COVID-19, officer killings are also on the rise. “We believe it’s a combination … of the George Floyd protests — riots, if you will; a general feeling of a preference for less law enforcement; and less prosecution and less policing,” said Jason Johnson, president of the Law Enforcement Legal Defense Fund (LELDF) and a 20-year police veteran.

Rising homicide rates in major U.S. cities have “naturally” resulted in “many more cops being assaulted because… a lot of officials in these cities, leaders in Congress, and leaders in the White House have really voiced a lack of respect for law enforcement personnel,” he added. According to the FBI, 73 officers were killed in the line of duty in 2021. In comparison to the 46 people who were killed on purpose in 2020, this is an almost 59 per cent rise.

The figures come amid rising public-police tensions following the police shooting of George Floyd in May 2020, which triggered national discussions on police violence, racial bias in policing, and laws geared at reducing police violence against civilians. However, activists and politicians have expressed hostility toward police in general as a result of the calls for justice.

Ambush attacks on officers were also on the rise in 2021. According to LEOKA data, 32 cops were slain in an ambush or unprovoked attack in 2021, breaking previous records that date back to 1987, according to the Heartland Institute’s research. Johnson believes the Biden administration’s “actions have shown that they are not supportive of the police,” noting that the president’s visit to New York City came just one day after tens of thousands of officers and civilians paid their respects to fallen NYPD Det. Wilbert Mora was laid to rest Wednesday following a funeral service at St. Patrick’s Cathedral.

On Thursday morning, the Biden administration unveiled a plan to restrict the flow of guns, strengthen law enforcement, and enhance financing for community policing, which Biden elaborated on during remarks at the NYPD headquarters. Senior administration officials said the strategy builds on steps announced by President Donald Trump in June 2021 to stop the flow of guns used in violence, provide federal tools and resources to local law enforcement to combat violent crime, invest in evidence-based community violence interventions, expanded summer programming, employment opportunities, and other services and support for teenagers and young adults, and help formerly incarcerated people.