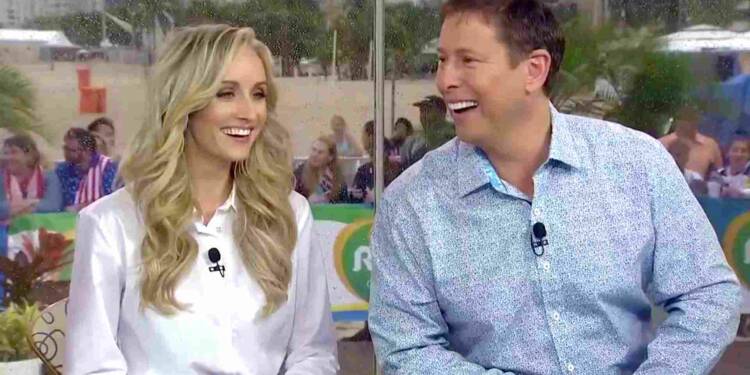 Timothy Daggett is an Olympic gold medalist, former American gymnast and is the primary commentator for NBC gymnastics. Tim Daggett was born on May 22, 1962 at Springfield, a city in the Commonwealth of Massachusetts, United States, and the seat of Hampden County.

Tim Daggett joined twitter in 2008 and has been active since then. His account has been followed by only over 7k people and can be reached at @timdaggettnbc on twitter.

Tim Daggett is married to Deanne (née Lazer), an M.D. who practices anesthesiology and was a collegiate gymnast at Eastern Michigan University. Peter and Carlie Daggett are their children. Tim named his baby Peter after Peter Vidmar, a teammate. Tim Daggett is the name of Peter’s kid. They are now all residing in East Longmeadow, Massachusetts.

Tim Daggett attended West Springfield High School and UCLA, where he, along with Bart Conner, Peter Vidmar, and Mitch Gaylord, competed in the 1984 Los Angeles Olympics. He earned his bachelor’s degree in psychology from UCLA in 1986.

Daggett achieved a perfect ten on the high bar, helping his team to a gold medal – the first in Olympic history for the United States men’s gymnastics team. He won an individual bronze medal on the pommel horse in addition to the team gold. He was elected to the United States Olympic Hall of Fame in 2005.

Tim Daggett began his future career in gymnastics by participating in the Parks and Recreation programme in West Springfield, Massachusetts, when he was ten years old. The local high school coach encouraged Daggett to train with his squad because he was progressing quickly. He competed in NCAA Division I gymnastics during his college years at UCLA.

Daggett’s ankles had always been a problem for him. Daggett dislocated one ankle after having the other reconstructed in 1980. He was obliged to recover from the rebuilding of his two ankles for months in 1986.

His high bar release ended with him landing on his neck immediately after the recovery during training. The outcome was a ruptured spinal disc, as well as damage to the left arm nerves. Despite expert advice, Daggett refused the offered surgery, which would have ended his career, and contracted mononucleosis after recovering from the near-fatal landing. The 1987 world championships in Rotterdam were a career-defining event for Daggett. Following a collision from a pike Cuervo on the vault, he shattered his tibia and fibula and cut one of his arteries.

He had surgery on his left leg to install and remove supporting braces and pins. For three months, he was sedated with morphine in hospitals.

After retiring from games

Tim Daggett has worked as a television commentator since retiring after the 1988 Summer Olympics in Seoul, covering the gymnastics events for NBC in the Summer Olympics in Barcelona, Atlanta, Sydney, Athens, Beijing, London, Rio de Janeiro, and Tokyo.

Similarly, Daggett’s facility hosts open gym sessions and a Martial Arts class that are accessible to the public. He is the head coach of the Boys Junior Olympic Team. His gym has produced numerous national champions and members of the national squad. The Tim Daggett National Invitational is an annual gymnastics tournament held in January at the Springfield MassMutual Center and hosted by Daggett himself.