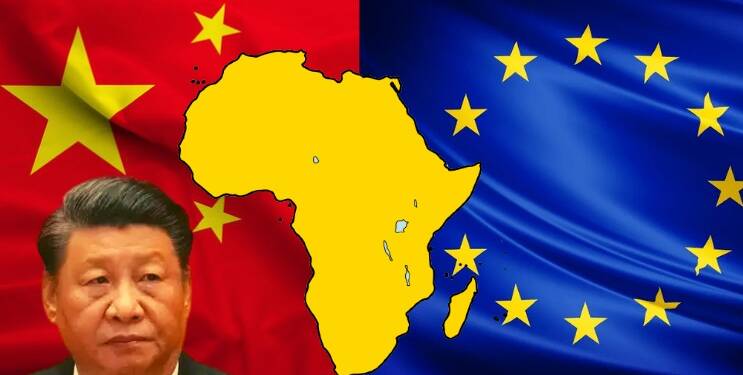 The situation in Africa is a very interesting one. The people of the continent have understood very well that China has been running a neo-colonial agenda, and they have had enough of it. Realising these developments in Africa, France has found a window of opportunity to not only remove China from the region for good but also increase its influence in the continent.

Ursula von der Leyen, the European Union’s (EU) chief, announced plans on Thursday to attract more than €150 billion ($172 billion) in investment for Africa, proclaiming Europe to be the continent’s “largest” and “most reliable” partner. As per reports, Von der Leyen, who is president of the powerful executive European Commission, arrived on Wednesday to prepare for a summit between the EU and the African Union (AU) on 17-18 February.

The scheme is the first regional plan under the European Union’s Global Gateway initiative, which aims to raise up to €300 billion ($345 billion) for public and private infrastructure around the world by 2027. The policy, which is seen as a counter to China’s Belt and Road programme, will boost private-sector investment with money from EU institutions and member countries.

Von der Leyen told reporters at a press conference in Dakar, Senegal’s capital, that she was “proud” to reveal plans for Africa, where the goal was to attract at least €150 billion in investment. She was tight-lipped about how the monies would be raised and used. Global Gateway is rooted in “the values to which Europe and Africa are committed, such as transparency, sustainability, good governance and concern for the well-being of the people,” von der Leyen said.

Before arriving in Senegal, von der Leyen told AFP that foreign investment in Africa was sometimes accompanied by “hidden costs.” Other significant investors in Africa, such as China, are frequently accused by critics of being less strict on environmental preservation and human rights. China has been accused of enticing African countries into debt traps by giving massive, expensive loans. Beijing denies the charge, claiming that its loans are intended to help poor people.

The Chinese Communist Party under the leadership of Xi Jinping has undone many of the economic successes his predecessors had achieved. And now with the economic situation in tatters and the exodus of companies out of the mainland, China is facing a significant cash crunch and has almost no liquidity to provide cushion to its failing businesses. And in a situation where the country is failing to finance its own companies, China has begun abandoning its promises in Africa as well. For the first time in over a decade, China’s financial commitment to Africa shrank, as the world’s second-largest economy sought to avoid criticism for saddling developing countries with unsustainable debt.

As reported by Bloomberg, President Xi Jinping offered $40 billion to the continent. That marked a 33 per cent drop from the $60 billion committed at the same summit in 2018 when China only matched the previous event’s pledge. Before that, China had doubled its financial commitment to the continent every three years since 2006 at the two-day forum, which is Beijing’s main vehicle for managing its relationship with the continent.

France led European Union has decided to un-debt-trap the African continent. In the process, France wants to rebrand itself as a world power that prioritises the growth of Africa, not filling its own coffers, which Europe did during its colonial history.