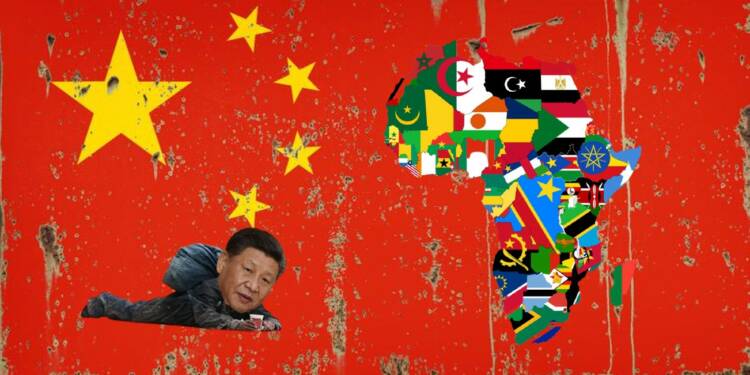 The Chinese Communist Party under the leadership of Xi Jinping has undone many of the economic successes his predecessors had achieved. And now with the economic situation in tatters and the exodus of companies out of the mainland, China is facing a significant cash crunch and has almost no liquidity to provide cushion to its failing businesses. And in a situation where the country is failing to finance its own companies, China has begun abandoning its promises in Africa as well. For the first time in over a decade, China’s financial commitment to Africa shrank, as the world’s second-largest economy sought to avoid criticism for saddling developing countries with unsustainable debt.

As reported by Bloomberg, in a video presentation to the seventh triennial Forum on China-Africa Cooperation, held in Senegal on Monday, President Xi Jinping offered $40 billion to the continent. The funds will be fairly distributed among loan lines to African financial institutions, Chinese investment, trade finance, and IMF special drawing rights. That marked a 33 per cent drop from the $60 billion committed at the same summit in 2018 when China only matched the previous event’s pledge. Before that, China had doubled its financial commitment to the continent every three years since 2006 at the two-day forum, which is Beijing’s main vehicle for managing its relationship with the continent.

Economic disaster and no solution in sight:

The People’s Bank of China (PBOC) wants to ease lending norms to pump money into the markets to avoid a deeper catastrophe in the real estate sector. On the flip side, the Federal Reserve wants to hike the interest rates to discourage further lending, which would help the government take the raging inflation. So, China now faces awkward choices where hiking as well lowering the interest rates would equally have devastating effects on the Chinese economy.

Read more: China is losing control of the Yuan and inflation is on the rise

Mired in too much inflation, Chinese producers are seeing their profits nose-diving and production costs surging at a blistering pace. The energy crisis, bundled with food and economic crisis, has made production a perilous job in China, prompting inflation to reach staggering levels. And if People’s Bank of China goes ahead with its easy monetary policy to help China’s sinking real estate sector, it will directly depreciate Yuan’s value.

The situation is so bad that the CCP is using the Asian Infrastructure Investment Bank (AIIB) to fund its Henan Flood Emergency Rehabilitation and Recovery Project in China. Imagine the second largest economy in the world, knocking on the doors of AIIB to secure a loan of USD 1 billion as its banks are out of cash.

The popular uprising against China after seeing the Uganda debacle:

Despite the abundance of minerals that has attracted the world’s largest commodity traders, the DRC has one of the lowest levels of GDP per capita globally. Small scale and artisanal gold mining, using rudimentary tools, is widespread. The risk of popular uprisings is giving an anti-China turn to political regimes in the African Continent. Coups in countries like Guinea and Mali, for example, have brought down pro-China regimes.

Read more: China’s Congo loot is out in the open and that’s bad news for Chinese people in Congo

While China can do what it wants in Xinjiang under the pretext of sovereignty, but same actions going on in Africa are going to have repercussions. These actions against the Chinese workers are a precursor to how people can express their anger.

Beijing has retaliated against recent accusations of “debt trap” diplomacy, claiming that no foreign asset has ever been seized by China to repay a Chinese loan. Local media reported earlier this week that Uganda’s government was attempting to renegotiate a Chinese loan arrangement in order to prevent losing control of the country’s only international airport, a claim Beijing dismissed as “made up.”

However, the increasing scepticism of Chinese investments in Africa will only embolden as the Chinese reduce their investments way below the pledged amount. While China may want to show itself as a strong power that is not retreating from its commitments, the statements mean nothing in front of verifiable data. And the facts on the ground scream a retreat by China from the African continent, in the face of drying liquidity in its banking sector, increasing criticism of CCP in Africa which are turning into hostilities for Chinese workers as well as governments working in cahoots with Beijing.