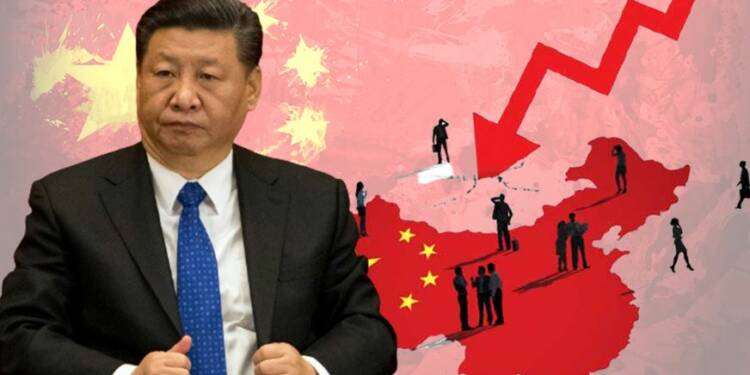 China’s predicaments are getting bolder with each passing day. So, as inflation soars and the property sector faces an even deeper slump, China today stands at a road split with two directions, but leading to the same destination.

This has created differences between the People’s Bank of China (PBOC) and the Federal Reserve, who are now pivoting in diverging directions to tackle the economic mess that Xi Jinping has created.

PBOC and Federal reserve on a collision course:

The PBOC wants to ease lending norms to pump money into the markets to avoid a deeper catastrophe in the real estate sector. On the flip side, the Federal Reserve wants to hike the interest rates to discourage further lending, that would help the government take the raging inflation. So, China now faces awkward choices where hiking as well lowering the interest rates would equally have devastating effects on the Chinese economy.

Mired in too much inflation, Chinese producers are seeing their profits nose-diving and production costs surging at a blistering pace. Energy crisis, bundled with food and economic crisis, has made the production a perilous job in China, prompting inflation to reach staggering levels. And if People’s Bank of China goes ahead with its easy monetary policy to help China’s sinking real estate sector, it will directly depreciate Yuan’s value.

No relief for exporters either:

Currency depreciation often helps countries boost the export economy, and makes their exports more competitive over other nations. But, China won’t get that luxury either. The reason is the massive outbreak of the Covid-19 pandemic across China, further stirring turmoil in the already-stressed supply chains of the world.

According to Bloomberg, China continues to prohibit crew changes for foreign crew, and recently imposed as much as a seven-week mandatory quarantine for returning Chinese seafarers, risking full recovery of the shipping industry and prolonged supply chain crisis.

Also read: In a big blow to its economy, China is set to be stripped off of preferential tariff treatment from 32 nations

But here’s another major problem: if currency depreciation fails to shore up China’s exports and lead to further plummeting of the country’s foreign reserves, it will further fuel the inflation in China.

Not manipulation, but economic crisis drives the fall in Yuan:

Banking on its strong exports economy, China has often resorted to engaging in currency manipulation activities to encourage its exports against the US. However, this time, not the manipulation, but the weak economic fundamentals are threatening to drive Yuan’s valuation into the ground.

Considering the extent of the crisis that China is facing today, the currency depreciation may very well enter a phase of the out-of-control downward spiral. With exports down, inflation high and currency value nose-diving at the same time, China’s economy may soon become a hell-hole for the global investors, in no time.