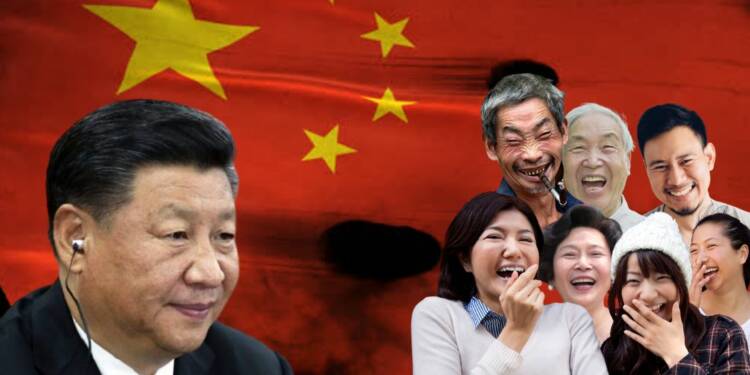 Xi’s brainless actions like tight regulatory measures, crackdowns against tech giants and edutech enterprises, tough regulations in the real estate sector, and an energy crisis due to unofficial bans on Australian coal and policy myopia have ransacked the Chinese economy. In the third quarter, Chinese economic growth receded to a mere 4.9 per cent. However, Xi wants Chinese people to believe that deteriorating Chinese growth is due to natural factors and not his policy failures.

A commentary published by the Chinese State-backed Xinhua News Agency has sought to undermine concerns about the ongoing economic slowdown in the Communist nation.

Xinhua has attributed slower growth in the third quarter to the reducing effect of a low base, which had led to higher growth numbers in earlier quarters. It has also blamed floods and COVID outbreaks for holding back Chinese GDP growth. With this, Xinhua is clearly hiding Xi’s disastrous mistakes.

In fact, the Xinhua report was republished by major newspapers like Securities Times and People’s Daily. It was even uploaded on the government’s website, which means that the Xi administration has itself orchestrated the eyewash.

The Xinhua report has also attempted to justify Xi’s disruptive policy actions. The State-owned media houses claimed that the antitrust investigations against tech enterprises and the crackdown on alleged monopolistic behaviour weren’t meant to suppress the private sector. It also claimed that actions to contain the “disorderly expansion of capital” have public approval.

Xi’s proposal of a pan-China property is all set to convert Chinese megacities into ghost towns. It has also faced criticism from various quarters within China. But Xinhua has reiterated the call to push ahead with the property tax reform, in line with Beijing’s plans to widen property tax trials to more areas and tax residential property owners.

Who ruined the Chinese economy- Xi or natural events?

The Chinese GDP growth is expected to stay lukewarm in the ongoing quarter and even next year. There are structural problems in the Chinese economy-

Xinhua may blame natural factors as much as it wants. However, Xi’s footprints are visible in every structural problem which is affecting China.

To start with, Xi was extremely short-sighted when he imposed unofficial bans on Australian coal in October 2020. Chinese thermal power plants were accustomed to working with Australian coal that has a high calorific value. Soon, Chinese towns started facing blackouts and Chinese factories had to scale down production due to power outages.

By the time Xi decided to restart importing Australian coal, it was simply too late. Chinese markets are facing a severe coal crisis today and Beijing is compelled to import coal of lower quality from countries like Russia and Mongolia, apart from importing more coal from Indonesia.

Shrinking industrial production in China has been characterized by a drop in the manufacturing Purchasing Manager’s Index (PMI) 49.6 in September from 50.1 a month earlier. Xi simply cannot whitewash the fact that the decline in Chinese exports is directly attributable to an energy crisis created by his policy failures.

Even the impending diesel crisis in China is a consequence of Xi Jinping’s mismanagement. True, the global crude oil market is battling tight supply and rising prices today. However, the Chinese diesel crisis is more of an internal problem.

In May, Beijing imposed heavy taxes on imports of light cycle oil (LCO), a blending component for diesel, in a bid to reduce fuel oversupply. At that time, Xi didn’t consider that there will be a likely shortage of oil supply in the future, which could lead to a tight supply of the critical energy resource to China. Lack of foresight and not stocking up enough supplies are reinforcing the diesel crisis in China.

Meanwhile, Chinese companies also recorded a huge decline in profits in the third quarter of the ongoing Financial Year. This was a simple consequence of Xi’s tech sector crackdowns. His actions have led to many billionaires like edutech entrepreneur Lary Chen getting reduced into millionaires. The market sentiment in China is really bad and tech companies have lost over $800 billion in combined market capitalisation over the past one year. This is not happening due to COVID breakouts or floods, but due to Xi’s disruptive actions.

Similarly, what Chinese State media wants to suggest is that the consumer goods markets are down due to floods and COVID outbreaks. Yet, it is because of Xi’s energy crisis that manufacturing costs are rising and making Chinese consumer goods more expensive. On the other hand, Chinese consumers are reluctant to spend more because they don’t trust their volatile President and are saving up whatever they have to see through an uncertain future.

Finally, in the case of the property sector too, Xinhua tried to dismiss the downfall of big Chinese property developers as singular cases of default. However, Xi is the one who exacerbated the fragile real estate bubble and allowed it to burst.

Xi knew that the Chinese property market is overstressed due to excessive activity and lack of demand. Yet, he didn’t try to cool the bubble, rather he tightened borrowing regulations for real estate firms last year. Heavily indebted China Evergrande Group with $300 billion in liabilities was the first one to fall as a consequence and is at risk of default. Other real estate groups like Sinic Holdings and Fantasia Holdings have already missed debt repayments.

Now, Xi is further stressing the property sector with his plans of a pan-China property tax and taxes on existing residents in megacities. This will ultimately force people in megacities to move to tax-free areas, effectively reducing commercial hotspots like Shanghai into ghost towns.

Xi can put the blame on ‘natural events’. But people of China will ultimately understand that he is the one responsible for their woes and will ultimately bring him down.