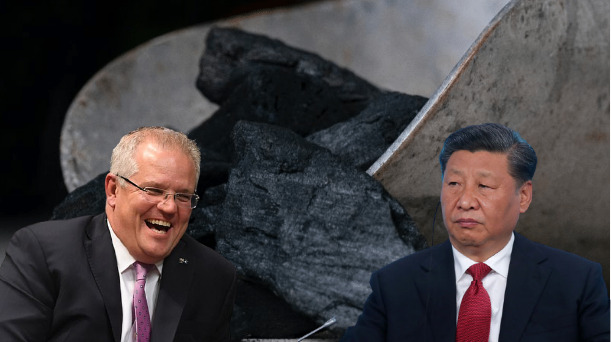 The myth around Chinese President Xi Jinping’s superiority stands busted. He has lost his biggest personal battle. We are talking about his battle with Australian Prime Minister Scott Morrison. Xi Jinping wanted to punish Morrison for speaking up against Chinese authoritarianism, so he decided to weaponise Australia’s dependency on China for running its exports industry. China banned the import of many Australian commodities. The biggest and most contentious of those bans was, of course, the unofficial ban on Australian coal.

However, Xi has gradually realised that China can’t survive amid the lack of Australian coal, so the Chinese President has quietly kneeled before Morrison and has decided to buy Australian coal.

As per Financial Times, China has begun unloading Australian coal consignments despite an unofficial ban on fossil fuel. Analysts believe that this sudden development underscores the seriousness of the electricity crisis in China.

Energy research firm Kpler too disclosed that five vessels waiting offshore released 383,000 tonnes of Australian steam coal to China last month. According to Argus Media, Australia had shipped around 50 million tonnes of coal to China in 2018 and 2019. In 2020, the number of shipments went down probably on account of reduced economic activity during the Coronavirus Pandemic.

Why China was forced to import Australian coal:

China has come to terms with a harsh reality- it is perilously dependent on Australian coal. For the past year, China has been facing a severe electricity crisis. Last year, the adverse effects of rising coal prices in China were starkly visible during the winter months. Many Chinese cities went dark since December 2020 itself, when lights went out and restrictions were imposed on the use of heating devices.

This year, China’s electricity crisis has gone up tremendously as a paranoid Xi Jinping continued the policy of blocking coal shipments from down under. Therefore, China had no option but to import coal from Australia.

All sectors of the Chinese economy from steelmaking, to textiles and even aluminium manufacturing, have witnessed an unprecedented downfall. China’s energy deficit is so bad that half of its regions missed the central energy consumption targets and are facing crumbling pressure to reduce power use.

However, Xi seems to have given up his campaign against Australian coal imports with approaching winters. It is October already and temperatures have started dropping in the Northern region of China. When the winter season hits all parts of China, the level of power demand will go up suddenly as people would need heating devices to keep their houses and buildings warm.

The Chinese power woes have already hit the household sector and the electricity generation deficit is no longer limited to industries. Xi fears a social revolution against the Chinese Communist Party (CCP) if the country’s households keep facing a power deficit.

China was the one to get into economic warfare against Australia. However, coal proved too crucial a commodity for China to avoid, therefore Xi has finally kneeled before Morrison.