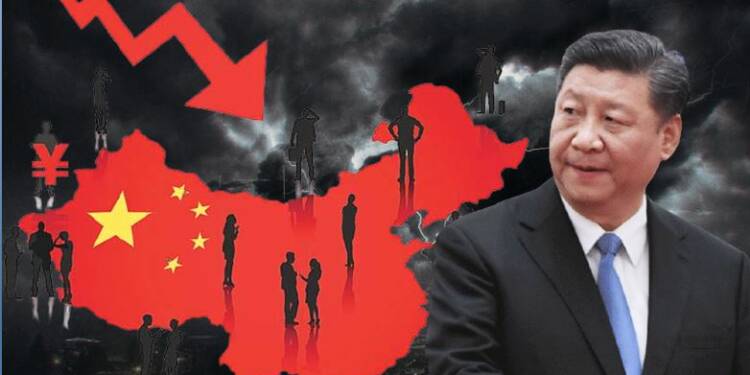 The Chinese economy has been hit by a perfect storm. In the third quarter of the ongoing financial year, official Chinese data revealed that GDP growth stood at 4.9 percent, down from 7.9 percent in the previous quarter. This decline in GDP growth is directly eating into profits of big Chinese companies.

There are two broad factors that are affecting business earnings in China- raw material inflation and low consumer spending.

Manufacturing of basic raw materials like aluminum, steel and other metals is becoming way too expensive in China, due to an ongoing coal and power crisis. This is leading to an abrupt rise in prices of finished goods. The official producer price index (PPI) rose by 10.7 per cent in September, as against 9.5 percent in August. Factory-gate prices have risen at a record rate due to surging coal costs amidst the ongoing power crisis in China.

For Chinese businesses, there is an interconnected problem – coal crisis is creating a severe power shortage crisis, the same power shortage crisis is inflating the prices of raw materials, and higher raw material prices are leading to greater manufacturing costs and more expensive consumer goods. The end Chinese consumer, who is already not willing to spend a lot of money, is getting further subdued due to higher prices.

On the other hand, both supply and sales in China aren’t showing any signs of growth in the communist nation. The consumer price index (CPI) grew by only 0.7 percent in September – the vast gap in factory gate inflation and retail inflation hints at low consumer spending. The spending capacity of the Chinese people has deteriorated and they are saving up for a period of greater suffering due to sheer uncertainty in the Chinese economy.

Also read: Why are Chinese citizens not flying?

In fact, China’s retail sales growth in August slowed down significantly from the expected 7% to just 2.5%. Therefore, while Chinese businesses are spending more, the consumers are spending less, which is leading to really low profits.

How bad is the situation in China – an industry-wise analysis:

Presently, the material suppliers are doing alright. Bellwethers like glass-fiber maker China Jushi Co. expect profit growth of a minimum of  220%, while Wanhua Chemical Group managed a hike of 139% on the back of rising volumes and prices.

However, the growth in the materials supply sector is highly transient. The sectoral growth is not real- it is being triggered by abnormally higher prices and tight supply of raw materials which has escalated competition for purchases of inputs amongst the Chinese manufacturers.

The Chinese industrial production has however, already contracted. The official manufacturing Purchasing Manager’s Index (PMI) in China stood at 49.6 in September, compared to 50.1 a month earlier. Such contraction has been recorded for the first time since February 2020. When there is a considerable contraction in the Chinese manufacturing activity, the sale of inputs and raw materials will decline sharply. Lack of demand will also bring down prices and that would lead to lower prices in the upcoming quarters.

This has to be one of the most stressed Chinese sectors. Xi Jinping imposed unofficial bans on Australian coal shipments last year, which led to blackouts across China this year.

Today, China is desperate for coal and is ready to get any price for purchasing it. Coal futures on China’s Zhengzhou Commodity Exchange hit a record $310.17 a tonne on October 19. Higher coal prices mean higher production costs, but the Chinese government hasn’t allowed increasing consumer electricity prices.

So, around two thirds of Chinese electricity firms are looking at a dip in earnings. Guangdong Electric Power Development Co. is in fact, expecting a loss for the first time this year.

Real estate is the most stressed sector of the Chinese economy, right now. Simply, no one wants to invest in Chinese real estate after China’s “Lehman moment” that was triggered by the perceived downfall of the China Evergrande Group. The value of nationwide sales in China fell by a whopping 17.5%, in August.

Also read: China is losing its Foreign Reserves faster than its credibility

China Evergande Group is riddled with over $300 billion in debt and the negative sentiment around the property giant is creating a contagion effect with  the failure of a Chinese real estate giant Fantasia Holdings Group to repay $206 million in debts due on October 4 and S & P Ratings has downgraded Sinic Holdings, another Chinese property giant, saying its “debt-servicing ability has almost been depleted”.

The picture is very gloomy in these sectors. In manufacturing, Semiconductor supplier Yangzhou Yangjie Electronic Technology Co. did report a rise of 87% in earnings and display panel maker BOE Technology Group Co. reported a quadruple growth. However, these firms have again made earnings only by passing on cost of higher components to the consumers.

But engine component maker Jiangsu Pacific Precision Forging Co., on the other hand, recorded a dip of 34 percent. Yet, consumer goods are worse-hit. Muyuan Foods Co. recorded a net loss of $128.4 million, whereas Wellhope Foods Co. expect a 94 percent drop in earnings. CITIC Securities too, has recorded a slowdown of 85% in profit growth.

Every sector of Chinese economy where higher costs can’t be passed onto the consumer, is recording losses. Even the sectors that are still making profits have relied solely on tight supply and higher prices. Going ahead, China is set to face a bigger disaster – shrinking consumer demand and skyrocketing production prices. This effectively means a perfect storm for the Chinese economy and no business enterprise in the communist nation can mark itself safe in these circumstances.