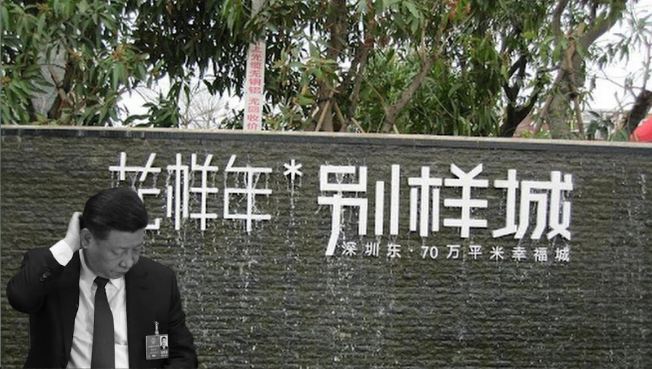 China’s fragile real estate bubble has started bursting already and it is all set to ruin the Chinese economy. China Evergrande Group, which is the second-largest real estate group in the Communist nation, is on the brink of defaulting on its debt obligations.

However, while the world looks at Evergrande Group’s downfall anxiously, a bigger debt crisis is evolving in China. In fact, another Chinese property developer has bitten the dust which exposes how China’s heavily indebted real estate sector is a ticking time bomb that can explode any time and lead to an unprecedented collapse in the Chinese economy.

Fantasia Holdings Group, a leading Chinese property developer, said on Monday that it had failed to repay $206 million in debts due on October 4. This is a new sign of tight liquidity and growing distress in the Chinese real estate sector.

The position of China’s real estate market is pretty bad. The Fantasia Group Holdings itself does not pose a major risk to the broader Chinese bond markets. The fact remains that it is much smaller in size when compared to the Evergrande Group.

As per data compiled by Bloomberg, Fantasia ranked 60th in terms of contracted sales in the first quarter of this year as against the 3rd rank for Evergrande Group. Fantasia’s total liabilities stood at $12.9 billion as of June 30, which dwarfs in comparison to Evergrande’s liabilities of $304.5 billion. Also, Fantasia’s offshore and local bonds amount to $4.7 billion as compared to Evergrande’s $27.6 billion.

However, Fantasia’s repayment default has corroborated concerns of a market contagion arising out of Evergrande’s imminent downfall. The fact remains that much of China’s real estate market growth is not based on useful activity. This is why the debt-driven real estate sector of China is suddenly staring into a deep crisis.

The Chinese government did try to cool the real estate bubble by curbing excess leverage and denying the liberty enjoyed by China’s real estate giants in the property sector to refinance debt.

China’s real estate bubble and debt crisis are bigger than you can imagine. Fitch Ratings said, “The existence of undisclosed liabilities could significantly affect our leverage, coverage and liquidity calculations and forecasts.”

As per Bloomberg, Fantasia’s nonpayment underscores the struggle of investors to identify opaque debt obligations in the Chinese real estate sector. Only last week, Fantasia had refuted a report that money for a privately placed bond had not been transferred.

China’s hidden debt is in any case a huge problem. There is a culture of undertaking opaque debt obligations in China and even the local Chinese governments have formed local government financing vehicles, or LGFVs.

Ultimately, the debt crisis in China’s real estate bubble is going to spill over to other sectors of the Chinese economy. With more debt defaults, Chinese and overseas investors are bound to feel the pain of a bursting Chinese real estate bubble.