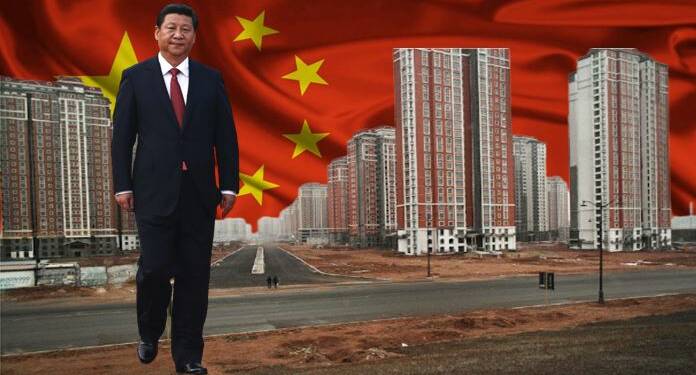 Chinese real estate growth : Look at this photo comparing Shanghai in 1990 and 2010.

We don’t even need to tell you how Shanghai and other megacities in China have changed over the past few decades. This photograph speaks for itself. China has witnessed stunning real estate growth over the past three decades or so.

Here are some fun facts for you:
1. Real estate construction and property services make up around 29% of the Chinese GDP.
2. China’s GDP stands at $16.642 trillion today. So, the Chinese real estate sector itself is worth around $4.8 trillion, which is bigger than some of the world’s biggest economies.
3. Three-fourths of the household income in China gets tied up in housing.

At the peak of China’s epic property boom, big towers came up in the six Chinese megacities of Beijing, Tianjin, Chongqing, Shanghai, Guangzhou, and Shenzhen, and also in other big cities in the communist nation. Yet, the Chinese metropolises could soon turn into ghost towns, as the Evergande crisis and a spate of unfulfilled housing projects are already making Chinese property buyers anxious. To top that, Xi Jinping’s new taxation policy is forcing existing household owners to get rid of their real estate assets.

As per a report by Yicai Global, the existing property owners in China’s top metropolises are desperately selling their houses to evade hefty property taxes to be levied annually by the cash-strapped CCP. Thanks to the speculative enthusiasm prevalent in the Chinese real estate sector, some Chinese today even own tens of houses in the megacities. Owning more than 1 house won’t cost them anything till now; however, it could burn a hole in their pockets if the new property tax is enforced. So, investors are now looking forward to reducing their risk exposure.

Hence, selling properties and buying houses in smaller cities, where the CCP does not intend to introduce the new property tax laws. Hence, the property tax system may help China grow its smaller cities at a mad pace, but Jinping will render its existing Metropolises into ghost towns. Effectively, Jinping risks undoing years of economic development witnessed in top cities in a matter of a few months through the ill-thought real estate “reform.”

Make no mistake, Xi decided to introduce a nationwide property tax with the idea that it would curb housing sector speculation. Xi even had a slogan to push through his plan – “Housing is for living, not for speculation.” However, as per Wall Street Journal, the plan of a nationwide property tax to control speculation in housing projects and deflate the real estate bubble faced opposition from Communist Party elites and its rank-and-file members.

This is perhaps the most embarrassing rollback for Xi. Initially, he wanted to impose property tax in 30 cities but with negative feedback, it has been significantly scaled down to just the top 5 or 10 cities. The city of Hangzhou, in the wealthy province of Zhejiang, and the capital city of Beijing are expected to be added to the pilot-tax program. However, the move has stirred tremendous anxiety among house owners in all the metropolitan cities. As per a Wall Street Journal report, “new law aimed at advancing the tax across the country likely won’t be finalized until around 2025, the last year of the current five-year development plan.”

Jinping’s disastrous real estate tax plan is a testimony of the fact that his economic outlook has lost its bearings. Jinping’s property tax will put a further burden on property owners, who are already suffering due to dwindling real estate demand and a 17% slump in Chinese house sales. As big municipalities are expected to introduce property tax, an insider at a housing rental agency with a large market share in China said, “Some people owning more than one house have entrusted their houses to us for leasing.”

However, these owners are now looking to sell the houses. So, they would not mind breaking the lease agreement. According to real estate chain Lianjia’s website, second-hand property sale offers jumped by over 10,000 units in the past three months in Beijing and by 8,000 units in Guangzhou.

No one seems to own multiple houses in Chinese cities and there are very few new homebuyers. The oversized Chinese real estate sector is getting exposed and the introduction of property tax in megacities will again create empty skyscrapers without any market demand.

The Chinese real estate sector is thus getting characterized by incomplete property projects and empty skyscrapers that no one wants to buy. Consequently, you can expect the biggest Chinese metropolises to turn into ghost towns if the real estate tax laws are rushed through by the authorities anytime soon.