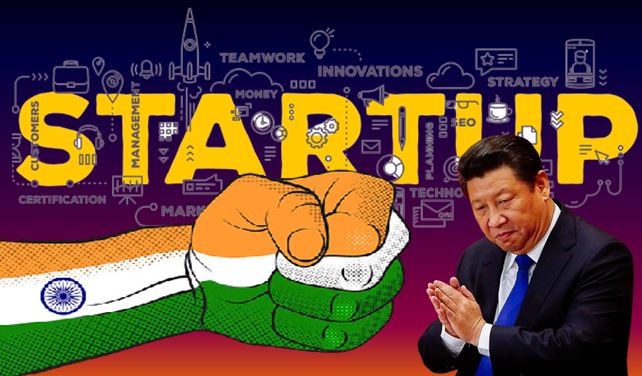 The international supply chains situation is going through disruption, and the massive economic disaster that China is going through is the biggest reason for the same. While China is struggling to manage its economy as every vertical market is in tatters, India is not only making an economic recovery, but it has moved ahead of China in the unicorn race as well (A unicorn is any private company whose valuation is $1 billion or more.). This year, India has created 33 unicorns, the most it has ever produced and the nation is greatly outnumbering the number of unicorns produced by China over the same time period.

According to Tracxn data, India is the first country to outnumber China in the yearly unicorn count in 2020, with 17 to China’s 16. This year, the gap has expanded to 33 against 19 for China. India’s GDP expanded by 20.1 per cent in the April-June quarter of this fiscal year, compared to a contraction of 24.4 per cent in the same quarter, in the previous year. India is now the world’s fastest-growing major economy, thanks to its enormous growth in the first quarter. These cumulative positives signal a positive outlook for India and prove how the Indian government is traversing these testing times quite efficiently, unlike Xi Jinping.

China’s construction industry’s output dropped by 1.8 per cent, its first drop since the pandemic began. That sector had never contracted prior to the epidemic, according to records dating back to 1992. As per Bloomberg, and according to figures released on Monday, China’s economy deteriorated even further in the third quarter, weighed down by the housing downturn and electricity shortages. The economy grew 4.9 per cent compared to a year ago, down from 7.9 per cent in the preceding quarter. Investment and industrial production grew at a slow pace, but retail sales improved modestly.

Read more: After the popping of China’s real estate bubble, China’s banking sector is set to fly into pieces

As the GDP numbers show no signs of revival in China, the communist nation is doing what no one would have imagined. It is opening up its markets as a last-ditch effort to lure foreign investors into staying within China. China’s regulator has expanded the investment scope for foreign investors. Key commodity and stock market derivatives have been opened up to foreign investors even as the country’s local private sector reels under the weight of tight regulatory measures and relentless crackdowns by the Xi Jinping government.

India’s economy will grow – The International Monetary Fund (IMF) has projected optimistic numbers for India when it comes to economic growth. It must be remembered that after two murderous waves of Covid-19 in India, India has been able to fully vaccinate 30 per cent of its population against Covid-19, while close to 70 per cent of Indians have been jabbed with at least one dose, and are awaiting their second shot.

Read more: IMF’s projections prove that India is growing at the cost of China

Of course, if there is one thing which the world has learnt in the past two years, it is to never say never. Nonetheless, the IMF has now come out and projected India to be the fastest-growing economy in the current financial year, with a 9.5 per cent growth rate. For 2022, the IMF projected that India’s economy will grow by 8.5 per cent.

India’s stock market, according to UBS Group AG, is in a ‘secular’ bull period that will continue. Anuj Kapoor, managing director and head of investment banking at UBS in India, told Bloomberg Television’s Rishaad Salamat and Haslinda Amin in an interview on Thursday that global liquidity has fueled the country’s benchmark index’s 28 per cent gain this year and that India offers good rates.

In addition to this, Industry body FICCI on Thursday marginally revised its FY22 growth forecast for the Indian economy to 9.1% from 9% estimated earlier. Currently, China appears to have focused all of its efforts on scaring away investors and regulating the markets, resulting in the disappearance of trillions of dollars in the blink of an eye. The Chinese markets have become extremely unpredictable under Xi Jinping, and investors are flocking to India instead, owing to our markets’ steady and respectable position in the globe.

China, for example, is putting a lot of pressure on its IT and tech industries. Until May of this year, the value of China’s ten top tech companies had dropped by about $800 billion. As a result, China is not a place in which any tech business would want to invest. Outflows from Chinese IT stocks appear to be resulting in inflows into Indian tech businesses, adding to the Indian IT and tech sector becoming one of the largest gainers in the aftermath of the Coronavirus outbreak.

Fintech and financial services account for nine of India’s unicorns this year, followed by enterprise applications and corporate infrastructure with seven unicorns, and consumers with six. Similarly, corporate applications and infrastructure have four unicorns this year, followed by fintech, food and agricultural tech, and consumer categories, which each have three unicorns. Gaming platform Mobile Premier League, grocery website Grofers, cryptocurrency exchange CoinDCX, and financial company BharatPe are among this year’s unicorns. This is a piece of good news for the whole world, as the rise of Indian unicorns professes more competitive and diverse markets for the future.