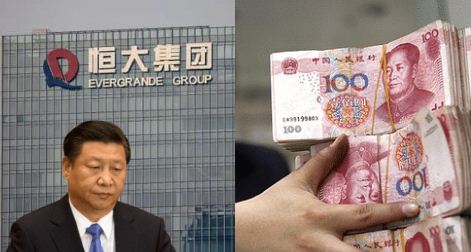 China rose to become the world’s second-largest economy, but due to the policies under Xi Jinping, it is now practically going bust. There was a time when the free world countries demanded that China open up its financial markets to outside investors, but China refused because it did not want to establish a fair playing field for other nations. However, China’s economy deteriorates owing to an energy crisis and a bursting real estate bubble which has, in turn, led to the Chinese banking sector crisis. It is liberalising all aspects of its economy and financial markets, just to entice foreign investors to stay and help revive what appears to be a faltering China’s economy.

The property and construction industries in China shrank in the third quarter for the first time since the outbreak, driven down by a real estate downturn. According to a supplemental report on a gross domestic product released Tuesday by the National Bureau of Statistics, output in the real estate industry, a mainstay of the economy since its activities support sectors ranging from furniture to commodities, decreased 1.6 per cent from a year ago. The industry gained 7.1 per cent in the three months ending in June, the first drop since the first quarter of 2020. These figures spell a disaster for the banking sector, given very many of these companies are going to turn into NPAs (Non-Performing Assets), and as soon as they are recorded in the overall calculation, it will entirely break the banking sector.

The crisis at hand

The construction industry’s output dropped by 1.8 per cent, its first drop since the pandemic began. That sector had never contracted before to the epidemic, according to records dating back to 1992. During the Evergrande crisis, the sector contracts for the first time since the epidemic. Consumer confidence in buying homes has been harmed by the rising debt problem at China Evergrande Group and other developers, which has worsened the effect of tighter limitations on property developers’ financing and property sale restrictions to keep prices in check. In September, the aggregate sales of China’s top 100 developers fell 36% year on year, and the slow pace of government-funded infrastructure investment has also harmed the construction industry.

As per Bloomberg, and according to figures released on Monday, China’s economy deteriorated even further in the third quarter, weighed down by the housing downturn and electricity shortages. The economy grew 4.9 per cent compared to a year ago, down from 7.9 per cent in the preceding quarter. Investment and industrial production grew at a slow pace, but retail sales improved modestly.

China is literally begging for investment

As the GDP numbers show no signs of revival in China, the Communist nation is doing what no one would have imagined. It is opening up its markets as a last-ditch effort to lure foreign investors into staying within China. China’s regulator has expanded the investment scope for foreign investors. Key commodity and stock market derivatives have been opened up to foreign investors even as the country’s local private sector reels under the weight of tight regulatory measures and relentless crackdowns by the Xi Jinping government.

China is in hurry now. Qualified foreign investors have been allowed to trade commodity futures, commodity options and stock index options with effect from November 1, as per an update on the website of the China Securities Regulatory Commission. China believes that opening up its markets will allow more foreign investments in the country, and reinvigorate its exports industry.

Falling home prices and China’s banking sector is in tatters

Falling home prices could start a vicious cycle by lowering demand, even more, aggravating the financial crunch at builders and compelling them to provide further discounts. The property and construction industries in China contracted for the first time since the pandemic began in the third quarter, slowing the country’s economic development. This month has seen a continuation of the downward trend. According to a Nomura Holdings Inc. note released Monday, existing-home sales fell 63 per cent in the first 17 days of October.

Even in the face of Beijing literally rolling for the investors again, divergent perspectives at the Milken Institute Global Conference revealed the challenges big money faces in determining whether China’s markets are a sinkhole or an opportunity. As per Bloomberg, “China is uninvestable,” Scott Minerd, global chief investment officer at Guggenheim Partners, which oversees more than $255 billion, said at the conference.

The Shanghai Composite Index has gained just 3.5% this year, trailing the 16.6% gain for the MSCI World Index. While the investments are drying up, the overall energy and industrial crisis have destroyed all the largescale plans to revamp the economy. These situations coupled with diversifying supply chains and nodes of production will send China’s banking sector flying into pieces.