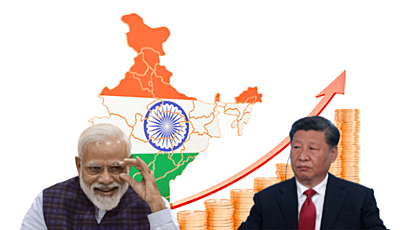 India’s economy will grow – The International Monetary Fund has projected optimistic numbers for India when it comes to economic growth. It must be remembered that after two murderous waves of Covid-19 in India, India has been able to fully vaccinate 30 per cent of its population against Covid-19, while close to 70 per cent of Indians have been jabbed with at least one dose, and are awaiting their second shot. Against such a backdrop, analysts and health experts are saying that the Covid-19 pandemic might have reached its endemic stage in India and that a new nationwide wave of infections might never arise.

Of course, if there is one thing which the world has learnt in the past two years, it is to never say never. Nonetheless, the IMF has now come out and projected India to be the fastest-growing economy in the current financial year, with a 9.5 per cent growth rate. In 2022, the IMF has projected India’s economy will grow by 8.5 per cent.

India’s economy had contracted by 7.3 per cent in 2020 due to the impact of the COVID-19 pandemic. IMF said that the global economy is projected to grow at 4.9 per cent in 2022. Earlier, in July this year, the IMF had cut India’s growth forecast by 300 basis points to 9.5 per cent for the current financial year from 12.5 per cent estimated earlier in April. The Washington-based agency said that India’s monetary policy projections are consistent with achieving the Reserve Bank of India’s inflation target over the medium term.

Interestingly, India’s record growth rate comes at a time when China’s economy has begun unwinding. China, the IMF said, is projected to grow at 8 per cent in 2021 and 5.6 per cent in 2022.

Currently, China seems to have directed all its energies towards scaring off investors and regulating the markets, leading to trillions of dollars being wiped out in the blink of an eye. Under Xi Jinping, the Chinese markets have grown very volatile, and investors are turning to India instead – due to the steady and respectable position which our markets have come to command in the world.

For example, China is cracking down hard on its IT and Tech sectors. The value of China’s ten major tech companies had dissipated by over $800 billion until May this year itself. So, China is not the country any tech company would want to invest in. Outflows from the Chinese tech stocks due to the regulations in China seem to be resulting in inflows for the Indian tech companies, contributing to the Indian IT and tech sector becoming one of the biggest gainers following the coronavirus outbreak.

In July, following China’s crackdown on the EdTech sector, investors lost nearly $1 trillion as Chinese stocks tumbled in fear of the CCP’s blatant regulation and interference in the nation’s business environment, which by the way, is already very polluted.

At a time when countries around the world are struggling with soaring cases of Covid-19, India has not just opened up its economy but is also growing at a record pace. The economic recovery under Prime Minister Modi has forced India’s critique – Moody’s to upgrade India’s rating after a period of two years.

Moody’s Investors Service, the New York-based rating agency has upgraded India’s economic outlook. Though it has still maintained its Baa3 rating for India, it has changed the outlook from negative to stable. A stable outlook means that they will not tamper with India’s rating in the near term, while a negative outlook for India meant that they could at any time declare our country as an at-risk nation for investment.

Despite being battered by two Covid-19 waves, for economy of India to be the fastest-growing in the world is really a statement of the resilience of our economic foundations and structure. India’s path to recovery has been almost immediate. Furthermore, India’s Covid-19 containment strategy is realistic in nature and does not involve near-unending lockdowns. Moreover, during lockdowns as well, the crucial sectors of the economy – like agriculture were allowed to operate normally.

Even Moody’s has attested to the same. The rating agency was appreciative of the fact that the Indian economy is fundamentally strong and does not depend on short-term events. They said, “Risks that a negative feedback loop between the financial sector and real economy have receded, resulting in lower susceptibility to event risk”.

Recently, key economic indicators have been constantly hinting towards India’s economy returning to its pre-pandemic level, and even surpassing it.

China is facing an intense power crisis. Industries are shutting down, which means production has stopped. So, China’s exports are inevitably taking a hit. This also means that multinational companies operating in China will find it unfeasible to continue operations in the Communist nation soon enough, leading them to think about alternative destinations – and India will figure prominently in those considerations.

The Indian economy is witnessing an unprecedented recovery, and the stock exchange is booming. The Indian equity markets have now emerged as the best-performing among global peers on a year-on-year (YoY) and year-to-date (YTD) basis on the back of robust retail and institutional participation and better-earning prospects.

The return correlation between India and global equities has declined to 61 per cent from over 80 per cent a few months ago. This means that the Indian markets are increasingly growing independent of their foreign peers. Now, crests or troughs in foreign markets will have a lesser impact on Indian stocks. This, when seen through the context of Prime Minister Narendra Modi’s push for an ‘Aatmanirbhar Bharat,’ or ‘self-sufficient India’, is a huge achievement.

Read more: China is no longer the most attractive investment destination in the world. India is

The market capitalisation of the Indian market has increased by a whopping $1 trillion in the past year, despite Covid-19 and its devastating economic impact the world over. Now, India’s market capitalisation stands at $3.2 trillion. This means Indian stocks are also the most expensive in the world with a valuation of 23 times FY22 expected earnings. Meanwhile, according to an index compiled by Bloomberg, the Indian stock market is set to break into the top-5 stock exchanges of the world. If successful, it will surpass the UK stock exchange.

India will soon achieve its $5 trillion GDP goal, and given the projections of IMF, the country will emerge as an economic superpower soon enough. What’s best about the meteoric rise of India is that it is coming at China’s expense.