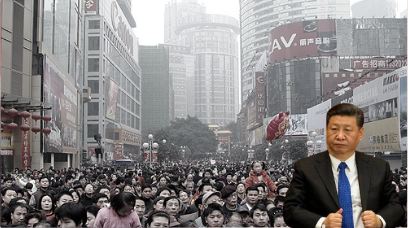 China’s power projection is perhaps the biggest illusion that a country has created in the 21st century. When you read what Chinese commentators or even Western analysts have to say, you might feel that you are witnessing the rise of a Great Power in the People’s Republic of China. Throughout the 1980s and 1990s, China registered stunning economic growth and today it is the second biggest economy in the world. In the past two decades, China’s strategic expansion too has been on display. Some people claim that China will become the most powerful nation in the world a few decades down the line, surpassing the United States of America.

However, China is on track to lose much of the steam that it has gathered over the past 3-4 decades. It is losing what is an essential foundation of every nation, weak or strong. We are talking about China’s declining population. Inflated statistics, lower fertility rates and repercussions of the one-child policy suggest that China’s population growth is on a major decline. By 2035, China will start feeling the pain of a declining population and lag behind the US on all demographic metrics.

And then population is not the only problem. China is also being led by a madman called Xi Jinping, who is literally cracking down on all the wealthy people within China, apart from picking fights with other global powers and isolating China in a rather awkward way. He is accelerating China’s decline even further.

Things like ‘official’ Chinese statistics are the reason why people have trust issues. A Chinese number is, in fact, the last thing you can rely upon. Take the Chinese population for instance, the Chinese Communist Party (CCP) has been inflating its population numbers in every successive census.

You might wonder that why a populous country like China has to inflate its population numbers. Well, to be fair China is getting old, due to CCP’s disastrous family planning policies. Soon, there won’t be enough young people in China to fulfil its economic growth objectives. In fact, the Chinese youth is already feeling demotivated under Jinping’s rule and China is staring right into a downward trajectory in terms of economic growth.

By 2035, China’s decline is expected to set in. This will be the time when the Communist nation will lag behind the US on all demographic metrics, and also in terms of economic growth. This will be around the same time as Jinping’s voluntary exit or forced ouster from politics.

The biggest issue that China faces is, of course, the problem of declining birth rates and an ageing population. China claims to host a population of 1.41 billion, but its actual population could be 115 million fewer than the official number. This would put China behind India in terms of population size.

China’s population figures keep getting “adjusted” again and again. Take, for instance, the average fertility numbers from 1994 to 2018. The average fertility for this time period was 1.36, but China’s family planning authority in charge of the country’s population control refused to believe the numbers. The numbers didn’t match Xi Jinping’s political ambitions and, therefore, the rate was “adjusted” to 1.6-1.8.

In fact, even though China claimed to have met the expected population level of 1.41 billion in its 2020 census, some post-census policy moves evoked suspicion. China has, for example, rolled out the three-child policy. The Xi Jinping administration has also unveiled a plan for increasing fertility rates in the country.

However, Jinping’s persona simply cannot drive hormonal urges in young Chinese couples. The one-child policy has given rise to a culture of couples in China who find it convenient to stay childless and avoid any financial burden. This is putting even more pressure on China’s dwindling demographics.

Meanwhile, Xi Jinping’s actions themselves aren’t helping China. He is only accelerating the evaporation of China’s superpower dreams. China’s stunning growth was fuelled by a strong private sector and rampant industrialisation.

And now, Xi Jinping is looking to hark China back to the Maoist era with the hard-core Communist policy of stealing and looting the rich in order to distribute wealth among the poor.

Meanwhile, Chinese youth are getting hopeless and lethargic. They have even launched a campaign called “lying flat“. Basically, millennials in China are advocating doing nothing and just “lying flat”. It is a protest against the CCP’s notion of working tirelessly as a means of prosperity, which forms the basis of China’s inhuman labour market strategy.

The Chinese youth have opened up to the West and are worried that they might end up doing no better than the older generations. Xi Jinping is trying to cut linkages between the West and the Chinese youth, but somehow Chinese millennials are able to understand how the CCP has been fooling them.

Also, Jinping’s incompetence isn’t the only factor to blame. China has grown rapidly but its innovation and research sectors haven’t evolved till now. China simply cannot boost innovation despite the best of attempts. It continues to bank upon intellectual property (IP) theft from the West.

However, the US and the rest of the developed world are no longer ready to let China eat into its intellectual property.

Without IP theft, China’s industrial sector will come to a grinding halt. Take the Chinese defence manufacturing sector for example. It is in shambles and has failed to produce top-grade military equipment or weapons systems. China’s indigenous technology is simply several generations behind Western technology, and once China loses access to foreign technology, its industrial growth will simply go into free fall.

China has grown into a big giant. But it is not an organised system, nor are its fundamentals in place. All of China’s woes are bound to culminate in a decade and a half. Right now, you read a lot about China’s might but a few years later, you will start finding reports of its sudden decline.