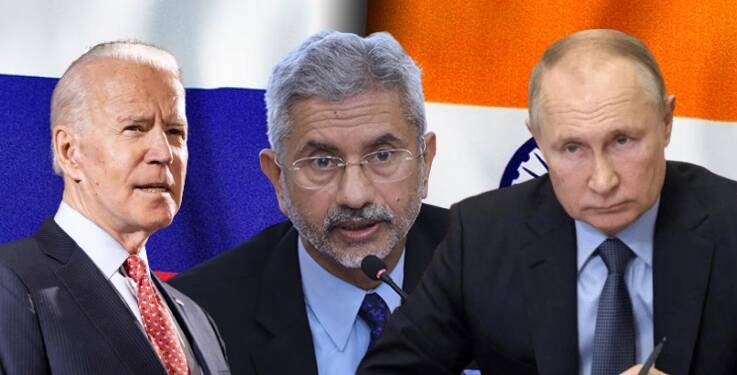 Ukraine is burning in a war fuelled by Joe Biden and the UK over the past six months. Ukraine has already lost a significant part of its territory to Biden’s fanaticism even when Russia is yet to exploit its devastating firepower.

Make no bones about it; it’s Biden’s war against Russia and not Ukraine’s. Ukraine is a mere pawn in America’s hands. And now Biden wants the world to back his attempts to demonize Russia at the world stage.

These attempts are driven by the perception in Washington DC that either you are against Russia or against NATO. But one nation that boldly continues to defy Biden’s warmongering on the Ukraine question is India, and expectedly, it has chosen its own side in the ongoing crisis rather than blowing the trumpets of war in Biden’s favour.

The Biden administration was trying to draw a parallel between China’s aggression against India and Russia’s military build-up around Ukraine to court New Delhi’s diplomatic support.

Jaishankar blasts the US for asking India’s support against Russia

But India’s foreign minister S Jaishankar minced no words in rejecting Joe Biden’s attempts to drag India into the Ukraine crisis. On Saturday, India’s diplomat-turned foreign minister said, “I don’t think the situations in the Indo-Pacific and transatlantic are really analogous.”

Last week, USA’s foreign secretary Antony Blinken signalled that the West’s response to the Ukraine crisis will set a precedent for other conflicts as well. However, Jaishankar on Saturday made it clear to the US that the conflict in East Europe was way different from that in Indo-Pacific.

Jaishankar issued a ferocious statement against the US emphasising that “if there was a connection by that logic, you would have had a lot of European powers already taking very sharp positions in the Indo-Pacific. We didn’t see that. We haven’t seen that since 2009.”

Read More: The day Ukraine becomes a full member of NATO will mark the start of WW3

India considers Russia a long-standing defence and strategic partner, and it abstained from voting against Russia in the UNSC meeting this January. Public sentiments in India also favour Russia above all, given extraordinary public-to-public ties between the two nations. India’s friendly ties with Russia are important if China’s aggression in the region is to be countered.

You see, Biden is fighting a highly unpopular war in Ukraine. No one at home supports Biden’s misadventure against Vladimir Putin. Around 60% of Americans oppose USA’s involvement in this crisis.

All in all, except for filling its coffers by selling weapons to Ukraine and selling LNG to Europe, America has no interest in pushing Ukraine towards a war with Russia. But the same can’t be said about Biden. Biden has an agenda of demonizing Russia and again mainstreaming China. Biden wants the world to shift its attention away from China to Russia, and thus give the CCP-ruled nation a free pass to run over its adversaries.

France prefers India over the US

But, India proudly stands in Biden’s way to scuttle his shameful campaign against Russia. Various European powers including France also share India’s views on the Ukraine crisis. For instance, India’s foreign minister S Jaishankar this week visited Paris where countering China in Indo-Pacific and not Ukraine, was the topmost agenda for both sides.

The French foreign ministry also said that the two ministers reaffirmed their shared vision of a free and open Indo-Pacific governed by the rule of law.

So, barring the UK, which is also known as the fifth wheel of the US foreign policy, no significant country seems willing to entertain Biden’s hostility in Ukraine. After the Afghanistan fiasco, the Ukraine fiasco has to be the biggest embarrassment of the Biden administration so far. India has rightly chosen to stick with its “India First” policy to show Biden his place and reaffirm India’s decades-long partnership with its iron brother Russia.