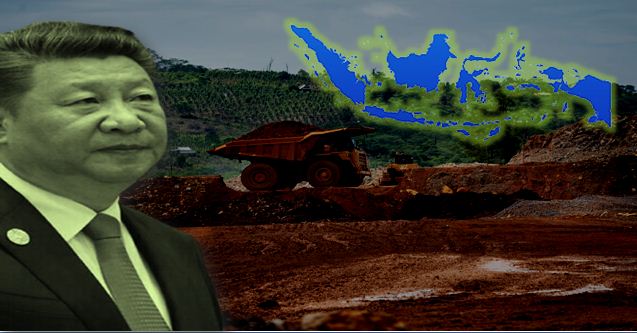 Much to China’s chagrin, the country houses only 3% of the global nickel reserves. China produced 120,000 tons of nickel at home in 2020, which is next to nothing considering China’s share in global EV production.

When China saw a lifesaver in Indonesia

So, China saw a lifesaver in Indonesia during the late 2010s. Indonesia is home to 23.7% of the world’s nickel ore reserves. It produced 853,000 tons in 2020, accounting for nearly one-third of global output. Minding the profit, China set its lustful eyes on Indonesia’s nickel reserves and inundated the nation with humongous investments.

Indonesia’s role in China’s nickel supply chains is going to be even more crucial in the coming years. But, Indonesia doesn’t want to reduce itself to a mere mineral exporting country. After all, it has switched to global nickel supply chains, thus can put its reserves to better use for its economy.

President Joko Widodo said last year that “Indonesia’s key business strategy is to free itself from the trap of being a raw material exporting country immediately and not to depend on imported products by speeding up the revitalization of the processing industry.”

In January, reports emerged that Indonesia may soon tighten its nickel exports in a bid to support the local EV and battery making industry and encourage foreign companies to produce EVs in Indonesia itself. And now naturally, this impending change in the Indonesian government’s policy has sparked fears in Chinese companies that have invested millions in the nation. Last September, the government of Indonesia had signalled a complete halt on bauxite and copper ore shipments. That shows the world’s largest nickel supplier is now striving to develop itself as a major EV manufacturing hub.

China in for a big jolt by Indonesia

China realizes that Indonesia has the power to kill its EV sector at its will. It was for this reason that a normally hostile Chinese PLA was seen distancing away from  Indonesian waters in a move to not irk Indonesia further and lose access to the nations’ nickel immediately.

By the end of December 2021, the stand-off between Indonesia and China over their respective claims to the waters around the Natuna region had become more strident. Indonesia believes that the regions extending north of the Natuna island fall under its Exclusive Economic Zone (EEZ), which is rightfully recognised by the UNCLOS as Indonesian waters.

However, China strongly challenges this claim, and last year went as far as s intruding into the Indonesian EEZ. However, the PLA didn’t take time in disappearing from Indonesian waters as soon as Indonesia announced a coal-export ban on the 1st of January this year. Thus, Indonesia’s mineral offence has also proven effective in dampening China’s desire for usurping Indonesian resources.

All in all, with increased competition and throttled supply chains in the nickel sector, China’s so-far flourishing EV sector is set to face unprecedented hurdles and challenges. And this may even end up killing China’s EV ambitions altogether.