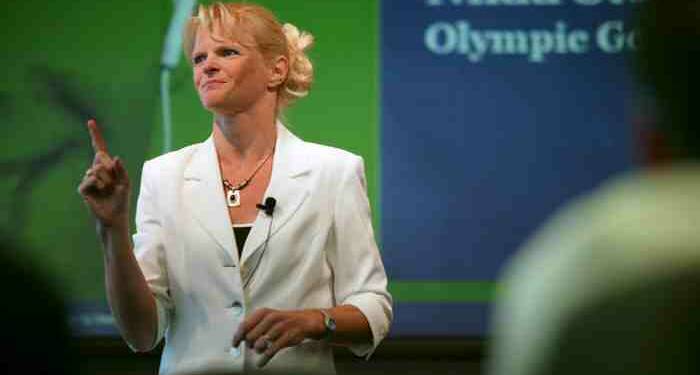 Nikki Stone is an Olympic skier from the United States. She was born in Princeton, New Jersey, and now calls Park City, Utah home. She was born on February 4, 1971. In this article we are going to talk about biography, notable works and books of Nikki Stone so read the full article here.

Nikki Stone is best recognised for being the first American to win a gold medal in inverted aerial skiing at the 1998 Winter Olympics in Nagano, Japan.

Aerial skiing is a sport in which competitors ski into a 10-foot (3-meter) snow jump at around 40 miles per hour (64 kilometers per hour), flip and/or twist to a height of 50 feet (15 meters), and land on a 45-degree incline. Niki Stone had a career-threatening spinal injury eighteen months before her second Olympic debut, and experts predicted she would never jump again.

Her twitter account can be reached at @NikkiStoneGold and has been followed by over 1k people. She joined twitter in 2009 and has been active since then.

When we talk about biography of some one how can we forget the career part so let’s talk about the career of Nikki Stone. She has 35 World Cup medals, 11 World Cup titles, four national titles, two year-long Aerial World Cup titles, and a World Championship title to her credit throughout the course of her career. She also became the first pure aerialist (male or female) to win the Overall Freestyle World Cup for the entire year. She and Bill Spencer carried the Olympic flame off the plane that brought it to the United States from Greece during the 2002 Olympics. In 2003, she was named to the National Ski Hall of Fame.

Nikki Stone is a motivational speaker, author, and coach for the new Regional Biggest Loser competition (in Wichita, Kansas). She has also served as a Visiting Professor at the University of Utah and a sports psychology consultant for a number of professional and Olympic athletes. The US Olympic Committee recruited Stone to assist Winter Olympians in overcoming adversity and distractions, dealing with extreme pressure, and establishing confidence in preparation for the 2010 Vancouver Games.

In January 2010, Stone published “When Turtles Fly: Secrets of Successful People Who Know How to Stick Their Necks Out.” It weaves her success stories with motivational stories from Shaun White, Tommy Hilfiger, Lindsey Vonn, Dr. Stephen Covey, and Prince Albert, among others. Shortly after the book’s release, Stone and the book were featured on the Today Show.

Stone has contributed to Yahoo! Sports, the US Olympic Committee, local newspapers, and ski magazines, among others. She contributed to the book “Awaken the Olympian Within: Stories from America’s Greatest Olympic Motivators” as a contributing author. This was the biography article of influential Niki stone and we can learn so many great things from her life and we hope that you enjoyed this article too. Please follow us for more news and updates on twitter : @tfiglobal