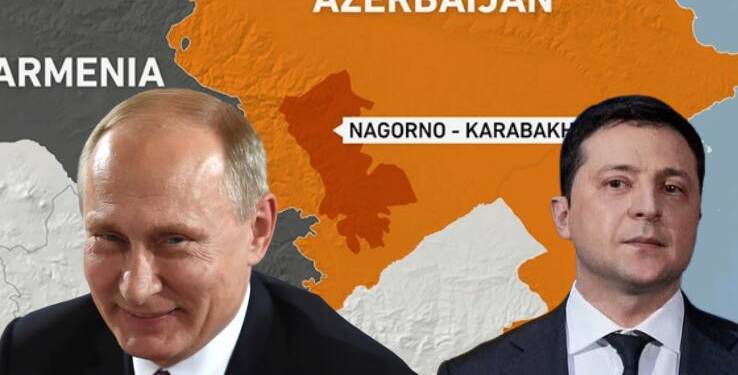 President Ilham Aliyev of Azerbaijan and Russian President Vladimir Putin signed a proclamation in Moscow on February 22, just two days before Russian tanks and missiles began crossing the Ukrainian border, promising to strengthen the bilateral relations between Russia and Azerbaijan to an alliance level. The 43-article document supports mutual cooperation in a variety of sectors, ranging from humanitarian and economic ties to security coordination.

Some Azerbaijani scholars suggested that the signed Russo-Azerbaijani declaration is a guarantee that Russia will not “pursue similar policies toward Azerbaijan [as it has against Georgia and Ukraine] in exchange for Azerbaijan recognising Russia as a dominant power in the broader former Soviet region.”

While this may have been Azerbaijan’s objective, going by the developments in the last two years, Russian President Vladimir Putin had an entirely different objective. During the Armenia-Azerbaijan conflict of late 2020, many commentators were astonished by the pacifist approach that Moscow took when it came to conflict resolution.

Armenia kept requesting for a Russian involvement, but Moscow entered the conflict as the peacekeeper and stationed its troops in the Nagorno-Karabakh region. Interestingly, at about the same time, the Russian concerns with respect to Ukraine had also started to increase. Vladimir Putin must have realised since then, that if it wants to tame Ukraine, there are bound to be sanctioned by the European countries and the US. And in such a scenario, having Turkey and Azerbaijan as absolute enemies will not serve any interest.

Instead, some concessions and a relatively transactional relationship will be immensely helpful in the long run. Therefore, despite the absolute dominance of Azerbaijan with the support of Turkey, Russia did not react aggressively. While it may have not made sense then, we most certainly have the answer now.

Baku–Tbilisi–Ceyhan (BTC) pipeline: a substitute to the Nord Stream 2

The Baku–Tbilisi–Ceyhan (BTC) pipeline has long been described by Azerbaijan and Turkey to Western diplomats as a way to circumvent Russia’s monopoly on gas deliveries to the West. The BTC pipeline gains increased importance as Europe (including the Biden administration) backtracks on the Nord Stream-2 Pipeline and European countries confront the extent of their energy dependence on Russia.

However, with Russia’s involvement in Azerbaijan’s gas resources growing, it’s critical to understand that, while the US, EU, and individual countries have imposed symbolic sanctions on Russia, it could still very well re-route the profits from its Azerbaijan investment. In essence, Russian President Vladimir Putin wants a win-win situation: he takes Ukraine and then exports gas via other lines (at inflated costs due to the crisis he manufactured).

A relatively friendly approach towards Turkey

We have seen, how Erdogan led Turkey, on the one hand, has tried to placate Russia on one hand, and challenge its overseas projects on the other hand. Considering Russia, one would expect a really strong response, but there have not been any overt escalations from the Russian side. Even though Turkey tried to chip away the Russian zone of influence, the cost to benefit ratio of escalation was not favourable to Putin. And now we know why.

While the US, European nations, and others debate whether or not to impose sanctions on Russia in response to its invasion of Ukraine, the Kremlin and its affiliated enterprises appear to be planning to use Azerbaijan to circumvent those penalties.

This has been further proven by the signing of the Moscow declaration. Azerbaijan and Russia declare their willingness to hold the same or similar viewpoints on international problems, as well as to continue constructive relations to promote stability and security in the Caucasus and Caspian regions, according to the Moscow declaration.

They also intend to create a permanent dialogue mechanism between the foreign ministries of the two nations in order to avoid measures that could jeopardise their strategic and allied relationship. Therefore, by playing safe during the Nagorno-Karabakh conflict, Putin has ensured that he has a replacement ready and available to the Nord Stream 2.