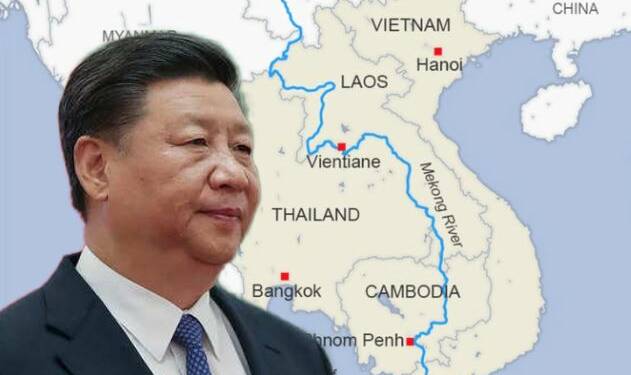 Chinese President Xi Jinping has waged war against Vietnam. And guess what this war is not being fought with guns, bombers and tanks but with 11 monstrous dams.

20 million people living in the Mekong River Delta along Vietnam’s southern coast are directly in danger of being hit by China’s water wars. China is holding back their water, which is creating obvious water scarcity in the region. And then, there is increased salinity which threatens agriculture, marine life and the seafood industry.

Why Mekong is important for Vietnam?

Vietnam is particularly affected by China’s attempts to hoard Mekong water, as Vietnam comes right at the bottom in the course of intercontinental Mekong river.

The river originates in China, before passing through Myanmar, Thailand, Laos and Cambodia, and finally flowing into the South China Sea near the Ho Chi Minh City in Vietnam.

Along Vietnam’s Southern coast, the Mekong river forms an incredible, 65,000 sq km freshwater delta. Like all other Delta regions, the Mekong River Delta too is extremely fertile and a hotspot for aquaculture.

So, we are not surprised if a fifth of Vietnam’s population is based in the Mekong River Delta region. I mean the region has water, ample rice and fish. So, why would anyone refuse to live here?

And this is where China’s practice of holding back Mekong water becomes a threat for 20 million lives.

The Vietnamese government has said that the Mekong River Delta will show increased levels of salinity this March due to upstream dams on the river and high seas during the dry season.

This has become an annual affair in Vietnam now. Vietnam’s General Directorate of Water Resources (GDWR) disclosed that high sea levels in March will cause increased salinization of four grams per liter as far as 35 to 50 km inland along the delta’s estuaries.

This is a big problem for Vietnam, because the intrusion of salty seawater infk the freshwater delta threatens local agriculture, seafood industry and marine biodiversity.

In the present case, the eleven monstrous dams built by China on the Mekong River are the main culprit.

Read More: China stole their water, so angry Cambodians come out on the streets to kick China out of Cambodia

With China limiting Mekong water discharge from its upstream dams, the water level in the Mekong Delta has been receding at an alarming. Vietnam’s National Center for Hydro-Meteorological Forecasting said that water levels of the Mekong River’s main water flows are down 4 inches to 4 feet when compared to the average levels over the past few years.

For people living in the Mekong River Delta, this is nothing short of a disaster. They are staring at destruction of agriculture, water scarcity and food shortage. This could lead to a mass migration crisis and deprivation of livelihoods.

In June 2021, even the Mekong River Commission (MRC) that includes Cambodia, Laos, Thailand and Vietnam had blamed upstream Chinese dams for alarmingly low water levels in the Mekong River.

Yet, it seems that China doesn’t care. It wanted to Mekong water and it has managed to do that, even if it comes at the cost of 20 million Vietnamese lives.