China stole their water, so angry Cambodians come out in streets to kick China out of Cambodia 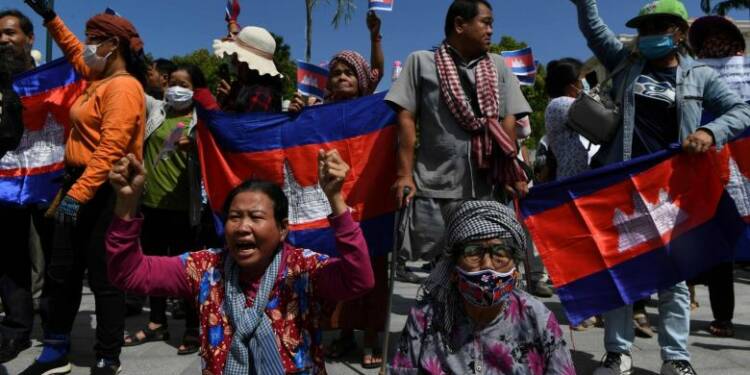 The diplomatic and strategic calculus in the Indo-Pacific is panning out in such a way that either elected governments/dictatorial regimes have become grotesquely anti-China or the people of the country are forcing governments to turn anti-China. Take for instance Cambodia where a small protest broke out near the Chinese embassy. They were protesting China’s plans to establish a military presence in Cambodia. A protester even went as far as shouting, “We reject the Chinese military presence in Cambodia.”

Cambodia is witnessing increasing anti-China sentiment over China’s bid to take complete control of the Mekong river and literally manufacture droughts in Lower Mekong Basin. Just like any other Lower Mekong Basin country, Cambodia is highly dependent on the Mekong River. Therefore, as China’s intentions of boosting its military presence in Cambodia became clear, Cambodians started protesting against China.

China, which enjoys an advantage as the upstream Mekong river position, has been drying up the trans-boundary river. The paper dragon has built eleven monstrous dams that can hold a combined water capacity of more than 47 billion cubic metres. China’s actions have already caused droughts in LMB countries- Thailand, Vietnam, Laos and Cambodia.

However, Cambodia’s government hasn’t been able to vent out the Southeast Asian nation’s frustration against China. Cambodia doesn’t have enough diplomatic heft to go after China over the Mekong river controversy.

The present Hun Sen administration in Cambodia has been in power since 1997. And the West’s tendency to target Phnom Penh over the issue of authoritarianism and political crackdown in the Southeast Asian nation by the ruling Cambodian People’s Party has made the Cambodian government somewhat wary of the Western world.

The People’s Republic of China itself was also no friend of the Hun Sen regime that came to power in 1997. However, Beijing tactfully ensured that it didn’t show any diplomatic hostility towards Cambodia unlike the West. Therefore, while the periodic Cambodian People’s Party crackdowns in Cambodia kept pushing Cambodia away from the West, China warmed up to Phnom Penh. Beijing can never be anyone’s friend, and Cambodia is no exception.

Therefore, the Chinese government has tried to gobble up Cambodia too. Predatory Chinese debts have ruined the Cambodian economy and as of 2019, Cambodia’s debt to GDP ratio stood at a precarious 30.09%.

Now, it was in this context that reports of Cambodia razing a US-built facility at the Ream Naval Base came in. The reports immediately sparked the concern that the Cambodian government was giving Beijing an opportunity to establish more military influence in the Southeast Asian nation.

However, the Hun Sen administration has remained in denial mode. Cambodia’s Prime Minister, for example, told a pro-establishment news website site Fresh News, “No such thing could happen because hosting foreign military bases is against the Cambodian constitution.”

He added, “We can allow access to ships from many countries to dock cargo ports, but Ream Naval Base is a military port, so you need to ask for permission. We welcome ships from any country not exclusively just Chinese ships to dock, refuel, or hold joint military exercises with Cambodia.”

From the Cambodian Prime Minister’s remarks, it became quite clear that Phnom Penh cannot afford to become pro-China, possibly due to the domestic opinion that tends to remain hostile towards Beijing. And now the protests outside Chinese Embassy make it even more manifest that the Hun Sen regime in Cambodia doesn’t simply have the option of letting China take control of the strategically-located country and use it for military expansion in the Western Pacific region.

As China makes Cambodia thirsty, the people of Cambodia are making sure that Chinese influence is cut to size in their country.