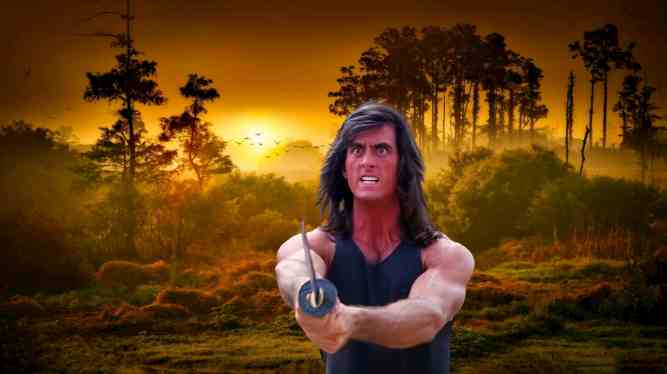 Mathew Karedas (born June 11, 1964), often known as Matt Hannon, is an American actor best known for his portrayal as Joe Marshall in the cult film Samurai Cop from 1991. With his wife and children, he lives in Calabasas, California.

Matt Hannon is not popular on twitter and has been followed by only over 1k people. His account can be reached at @mkaredas on twitter and is not very active.

During the late 1980s, Matt Hannon was one of Sylvester Stallone’s bodyguards. As a result, he decided to pursue acting. “It’s a very rarefied air for the very wealthy in Sly’s world – it’s intoxicating. He’d just finished Rambo III and Tango and Cash at the time, and after spending all that time hanging out with all these superstars, I decided I wanted at least 1% of what he made. “He’d done it!”

After Samurai Cop, Matt Hannon was unable to land any significant roles, and he left the entertainment world for two decades. In 1992, he took part in an armed robbery at televangelist Gene Scott’s University Cathedral in Los Angeles, when he stole a Rembrandt artwork. The painting was discovered at Kourosh Jadali’s residence, who served as a stunt coordinator on the production of Samurai Cop. Matt Hannon was eventually apprehended and imprisoned. He was mainly unaware of Samurai Cop’s rise to cult status in the years that followed.

Matt Hannon has indicated that he often checks his IMDb profile and has seen that many people believe he is dead, albeit this could be owing to his legal change of surname to Karedas in the early 1990s. In an interview with RedLetterMedia, Karedas indicated that he was content with the public believing he was dead. When his daughter released a video of him saying he was alive to YouTube, he regained notoriety. He went back to acting in 2015, recreating his role as Joe Marshall in Samurai Cop 2: Deadly Vengeance.

His master/ he body guarded

During the late 1980s, Mathew Karedas (Matt Hannon) was one of Sylvester Stallone’s bodyguards. Sylvester Enzio Stallone is an actor, screenwriter, director, and producer from the United States. He gained his first critical praise as an actor for his co-starring part as Stanley Rosiello in The Lords of Flatbush, after laboring as a struggling actor for a number of years after coming to New York City in 1969 and then Hollywood in 1974.