Putin’s popularity breaks all records during the Russia-Ukraine war 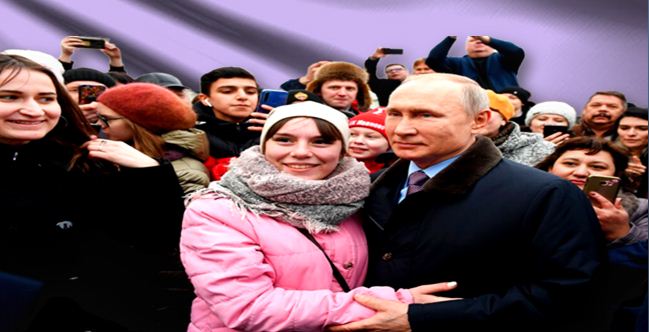 The United States and its allies are scrambling to respond to Russia’s invasion of Ukraine. The US, the UK, and the European Union all announced new sanctions this week. These sanctions are aimed at Russian capital invested in the West which includes the country’s banks, and government officials, and might even include a restriction on semiconductor chip and energy imports.

The majority of the West has vehemently condemned Russia’s invasion of Ukraine and the states are reciprocating this sentiment with wholesale sanctions. While these sanctions were intended to hurt Vladimir Putin, they are having opposite reactions. The isolation has in turn made the Russian population more resolute in their support for the President.

The unintended impact of sanctions

While the majority of the West condemned Russia’s invasion of Ukraine, Putin can count on the backing of a sizable percentage of the populace who believes in the Kremlin’s official narrative: Putin is carrying out a legal “special military operation” in Ukraine to liberate the country from a Nazi administration. According to a recent poll by a Russian state-owned pollster, almost 65 per cent of Russians approve of the “special military operation” in Ukraine.

Most citizens agree with the government’s account of the operation, which is designed at “protecting the Russian-speaking population of Donbas,” according to the poll.

According to this account, the conflict in Eastern Ukraine between the Ukrainian army and pro-Russian separatists has been a “genocide” of ethnic Russians perpetrated by Kyiv since 2014. This view is further strengthened by the fact that there are multiple armed groups with extremist views active in these regions, who have consistently committed atrocities on ethnic Russians.

As a result, Russia has the right to interfere and put a stop to it. “Russia is not going to start a war.” In a Facebook post, Maria Zakharova, a Russian Foreign Ministry spokesman, wrote: “It is coming to an end.” According to another local poll, popular trust in Putin has risen from 60% to 71% since the crisis began.

Read more: USA’s EV push will cancel its own sanctions on Russia

Rally around the flag

As mentioned by foreign policy analyst Clint Ehrlich, in Russia, the average citizen sees the conflict as a war of necessity – one forced onto Russia by NATO and Ukraine. This was confirmed by a poll conducted by the Levada Center, a non-governmental polling firm widely trusted in the West, where more than 66% of Russians blamed the conflict on America, NATO, or Ukraine while only 4% said the conflict was Russia’s fault.

They have it backwards: His power inside Russia is surging.

A thread on what analysts are getting so wrong. 🧵

As per Clint, the perceived cruelty of the current sanctions is making the West *more* of a villain in Russia. He said some Russians that he knew and who had favourable opinions of the West now feel like they are *personally* under attack. They resent being the targets of economic warfare.

In addition to this, the increasing news of social ostracisation that the Russian are facing in the west is only increasing these feelings. All in all, the Russian Federation is currently becoming a living definition of the “rally around the flag” phenomenon. It takes place when there’s a short-term surge in voter approval as the nation unites behind its leader during a crisis or emergency.

While the western nations may think that they will be able to create an anti-Putin wave by these stringent sanctions, the reality on the ground cannot be further away.