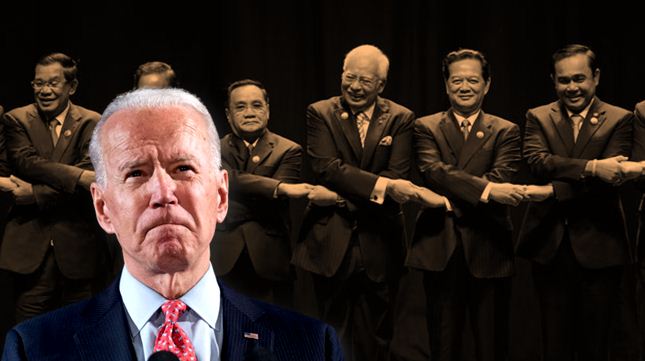 The US president Joe Biden was longing for an ostentatious meeting with ASEAN nations, a powerful bloc of the Indo-Pacific, by the month-end. It would have brought Joe Biden some diplomatic relief on various fronts.

First, a message could have been sent that the US has not completely shifted its attention away from the red-hot tumultuous waters of the Indo-Pacific. Secondly, it would trigger Moscow that ASEAN is standing with Washington at a time when the US and Russia are going through the biggest ever diplomatic crisis since the Cold War. Sadly, ASEAN cancelled the meeting.

Cambodia blamed disagreements over the meeting schedule for the postponement

Cambodia, the current chair of ASEAN, decided to postpone the meeting. It said, “The summit will be delayed because some ASEAN leaders can’t join the meeting as scheduled.”

Cambodian Prime Minister Hun Sen on Monday said at least three ASEAN leaders were not happy with the meeting schedule. The USA was keen on holding the summit on March 28-29.

But some ASEAN leaders chose to put forward some changes. At least three nations proposed the meeting be held on March 26-27. The USA, reportedly, denied. Thus, the meeting stood postponed altogether.

Cambodian Prime Minister didn’t identify the three nations raising objections to the schedule proposed by the US.

What’s the hidden message for the US here?

ASEAN’s reluctance to give in to the USA’s demands of holding the summit at a time of its choosing has many messages for the US. One is that the US is no longer a priority for ASEAN.

These countries are not dying for having a discussion with the so-called greatest power of all times. Sadly, that’s the true state of affairs under the 79-year-old president Joe Biden.

The other message is that ASEAN nations don’t want to be viewed as a friend of the US during the Russia-Ukraine crisis. Russia is the clear aggressor in the Ukraine crisis, and Biden has spent the last two weeks attempting to court support from ASEAN nations to rally behind his anti-Russia campaign. But his charm-offensive has proved all but an astounding failure.

The vanishing diplomatic cachet of the US

Barring Singapore, Brunei, and the Philippines; no other country has found anything wrong with Russia invading Ukraine. That’s a great diplomatic setback for the US.

But it looks like Joe Biden’s humiliation is hardly out of the ordinary anymore; instead, it’s become commonplace. Recently, a Wall Street Journal report had revealed that Biden simply got ghosted by Arab leaders like Saudi Crown Prince Mohammed bin Salman (MBS) and the crown prince of Abu Dhabi, Mohammed bin Zayed Al Nahyan (MBZ); just because they were more interested in listening to what Putin spoke to them.

Read More: MBS and MBZ give Joe Biden the biggest humiliation of his career

The Saudis and the Emiratis are miffed with the US over its flawed Middle East policy. So are the ASEAN nations, over Biden’s highly ambiguous Indo-Pacific policy. No nation, literally no one, feels it necessary to respect the US anymore; simply because it doesn’t bring any benefit to them. Frankly speaking, the US under Joe Biden has completely lost it.

Joe Biden’s foreign policy has proved to be a disaster of epic proportions. From Arab nations to its Quad allies, From Europe to the Pacific, and from Latin America to Africa; the US is continuously being taken for a ride by its adversaries in almost every part of the world. And Clear winners of Biden’s inept foreign policy are nations like China and Russia.