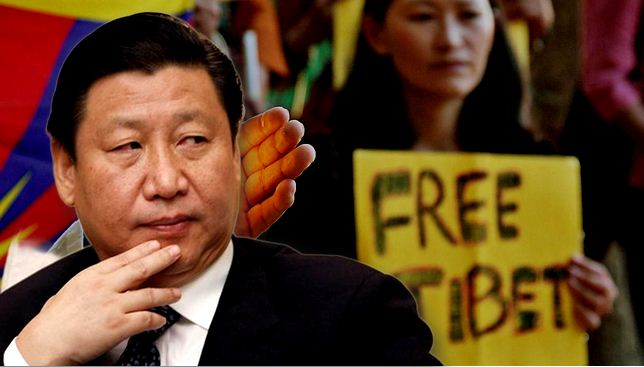 No matter the developments in the world, Beijing is consistent in the brutalities of its minorities. While the world is glued towards Eurasia, one constant is the atrocities that the Chinese Communist Party commits on hapless Tibetans. During the Lunar New Year, Chinese authorities banned large religious activities at monasteries in and around Tibet’s regional capital Lhasa, citing COVID-19 concerns. Critics, on the other hand, see the action as a further intrusion by China on Tibetan religion and culture.

Now, according to reports in the region, security in Tibet’s capital Lhasa was notably intensified on Thursday. On the anniversary of an uprising against Beijing’s control, a well-known Tibetan musician set himself on fire in protest in front of the city’s renowned Potala Palace. Military vehicles were out in force in the capital. According to sources, several streets were sealed off on the day with thousands of Tibetans flooding the city to protest China’s annexation of their homeland.

The revolt was put down by Chinese security forces, resulting in a harsh crackdown on Tibetans and the exile of their spiritual leader, the Dalai Lama, to India.

According to the RFA, officials began recruiting unemployed Tibetans from villages on the outside of Lhasa to “watch the situation” for any signs of disturbance, especially around the revered Sera, Drepung, and Ganden monasteries. “ From one of the villages alone, around 30 unemployed Tibetans were hired, and most were sent to Lhasa and Shigatse,” he said, referring to another prefecture-level city in the Tibet Autonomous Region (TAR).

In the days leading up to Thursday’s anniversary, other sources told RFA that police had been monitoring the three monasteries in Lhasa at all hours of the day and night, and the controls were significantly tighter than the previous year.

Tsewang Norbu, a popular contemporary Tibetan musician died as a result of his injuries, making him the 158th Tibetan documented to have set fire to oppose Chinese authority in Tibetan territories since 2009. Another eight people have committed suicide in Nepal and India.

On March 10, 1959, Tibetans in Lhasa rose in protest of Beijing’s expanding political and military control over the formerly independent Tibet, igniting a rebellion that resulted in thousands of deaths and the exile of Tibet’s spiritual leader, the Dalai Lama, to India. A riot broke out in Lhasa on March 14, 2008, when Chinese authorities put down four days of peaceful Tibetan rallies, resulting in the damage of Han Chinese shops and violent attacks on Han Chinese inhabitants.

The incident spawned a wave of anti-Chinese protests that expanded across Tibetan-populated areas of western Chinese provinces, with hundreds of Tibetans jailed, assaulted, or shot by Chinese security forces as they tried to put an end to the unrest. Tibet is under Chinese authority, and Tibetans living there routinely complain of discrimination and human rights violations by Chinese authorities, as well as on policies that are aimed at destroying Tibets’ national and cultural identity.

On Thursday, Tibetans around the world conducted rallies to show their support for individuals living in Tibet under Chinese authority, with many organisations protesting outside Chinese embassies and consulates.

To commemorate the anniversary, Sikyong Penpa Tsering, the head of the Central Tibetan administration in exile in Dharamsala, India, issued a statement condemning “the ongoing systematic Sinicization of the new generation of Tibetans in Tibet” through policies that promote ethnic assimilation, enforce the use of Chinese language and close schools for minorities. He also encouraged UN High Commissioner for Human Rights Michelle Bachelet, who is visiting China in May, to look into claims of human rights violations in Tibet.

A North Korea-South Korea merger has a realistic chance now