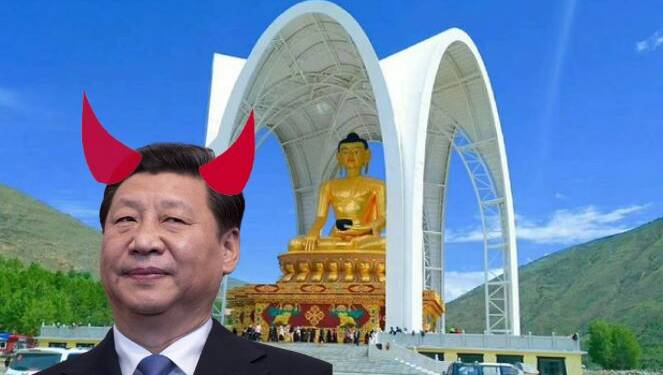 The extent to which Xi Jinping and the Chinese Communist Party are willing to go to belittle the Tibetian people looks similar to the medieval marauding armies who went on plundering cities and civilisations. As the reports are coming out, the CCP deliberately destroyed a sacred statue along with prayer wheels.

As reported by RFA, following official complaints that the monument had been constructed too high, authorities in China’s Sichuan province compelled Tibetan monks and other residents to watch the dismantling of a massive and venerated Buddha statue last month. According to accounts, 45 traditional prayer wheels set up for use by Tibetan pilgrims and other worshipers were destroyed along with the 99-foot tall monument in Drago county in the Kardze Tibetan Autonomous Prefecture.

According to the report which mentioned Tibetan sources in exile with contacts in the area, Chinese officials compelled monks from Thoesam Gatsel monastery and Tibetans living in Chuwar and other neighbouring towns to witness the demolition, which began on December 12 and lasted for nine days.

The destruction and shaming of Tibetian culture and their religion

“Local Tibetans from other villages were also forced to come to see the demolition,” said one Tibetan residing in India, who spoke on the condition of anonymity to protect family members still living in Drago. He added that a significant number of officers were also present to ensure that spectators did not take photographs or recordings or cause any disruptions. “It was comparable to the Cultural Revolution in [1966-76] when the Chinese government destroyed everything old in Tibet,” he claimed.

The Buddha monument in Drago, which was completed on Oct. 5, 2015, was created with contributions of roughly 4 million yuan (USD 629,445) from local Tibetans and was designed to endure earthquakes, according to Palden, a former Drago resident now living in India as reported by RFA.

Xi Jinping is scared of Tibet

Chinese President Xi Jinping knows he has wronged the people of Tibet. He also knows that Tibetans are not Communist Jingoists who will sell their souls only to court favours with the CCP. Instead, Tibetans seem to be growing determined to fight for freedom.

Read more: Tibet is set to flare up during 2022 Beijing Olympics and China is petrified

The Chinese Communist Party seems to be acting on specific intel, which suggests Tibetan freedom fighters might be looking to strike the Beijing Winter Olympics.

Nothing that is being reported out of Tibet is taking place in isolation. Tibetan activists from around the world have been leading campaigns calling on the world community to boycott the Winter Olympics being held in Beijing. They have been calling for China to be sanctioned for its atrocious human rights record.

Xi Jinping’s re-election as China’s president depends a lot on how the Winter Olympics will play out. Any mishap or embarrassment for the CCP at the Winter Games will deal a decisive blow to Jinping’s ambitions of becoming President again.

In such a situation, Xi Jinping has attempted many things including forcing the Tibetian children into a vast system of government-run “boarding schools”, where they are cut off from their families, language and traditional culture. However, all these things are not sufficient for the ever-paranoid Xi Jinping and he has stooped to the absolute acting like the Taliban who destroyed the Buddhas of Bamiyan back in 2001.

While there were no Buddhists in the vicinity to observe the desecration of the statues as well as their religion and culture; in the current scenario, CCP forced the people to helplessly see the destruction of the statue of the God that they worship and find the strength to survive under the oppression of the Communist regime.