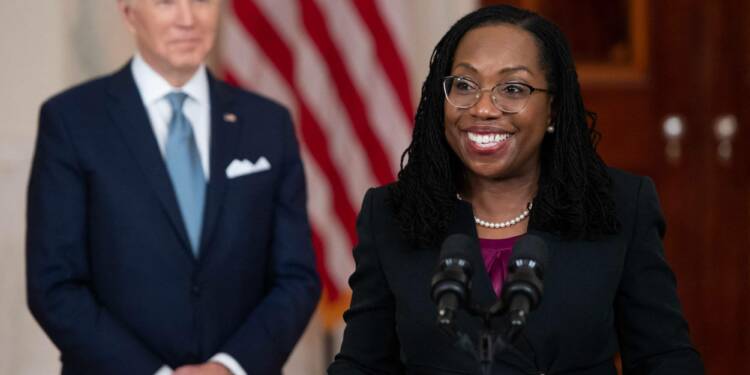 Judge Ketanji Brown Jackson, with President Joe Biden, speaks after she was nominated for Associate Justice of the US Supreme Court, in the Cross Hall of the White House in Washington, DC, February 25, 2022. (Photo by SAUL LOEB / AFP)

“I’ve made no decision except (the) person I will nominate will be someone with extraordinary qualifications, character, experience and integrity,” US President Joe Biden said in an address from the White House.

“And that person will be the first Black woman ever nominated to the United States Supreme Court,” emphasized Biden as he addressed the nation on the retirement of the liberal justice Stephen Breyer.

Biden may not follow through on any of his promises, but he surely hasn’t forgotten about his vow to appoint a black woman to the US Supreme Court. We saw a rare instance of Biden keeping his word when he nominated federal appeals court Judge Ketanji Brown Jackson to the United States Supreme Court.

The vow was part of his vital outreach to the Black community, which became a crucial component in ultimately defeating a crowded field of Democratic rivals and then unseating Trump.

Introducing Ms Jackson, Biden called her a “proven consensus builder” who has “a pragmatic understanding that the law must work for the American people.”

“She strives to be fair, to get it right, to do justice,” the president added.

She may just be the best candidate for Democrats as she has appeared to be quite prejudiced against the Trump administration in several situations. Jackson was involved in instances that directly impacted former President Donald Trump, and she was surely a thorn in his side.

Furthermore, Jackson has a track of leniency when it comes to sentencing those who have pleaded guilty to child pornography possession or distribution.

I’ve been researching the record of Judge Ketanji Brown Jackson, reading her opinions, articles, interviews & speeches. I’ve noticed an alarming pattern when it comes to Judge Jackson’s treatment of sex offenders, especially those preying on children

On the first day of Jackson’s confirmation hearing, Senator Ted Cruz (R-Texas) produced a chart that noted in several child pornography cases, Jackson had pronounced sentences that were a 14 per cent to 64 per cent reduction from what the prosecutor had requested.

In fact, to everyone’s shock, when Sen. Marsha Blackburn during the confirmation hearing asked Ms Jackson to define the word “woman,” she replied, “I can’t”. She further added that she is not a “biologist”.

Such startling replies to these sensitive questions where she was expected to give a strongly opinionated answer put a big question mark on Biden’s choice. President Biden may have informed the world that he chose Jackson because of her extraordinary and astounding character, but it appears that Biden’s decision was made solely to appease the Black community.