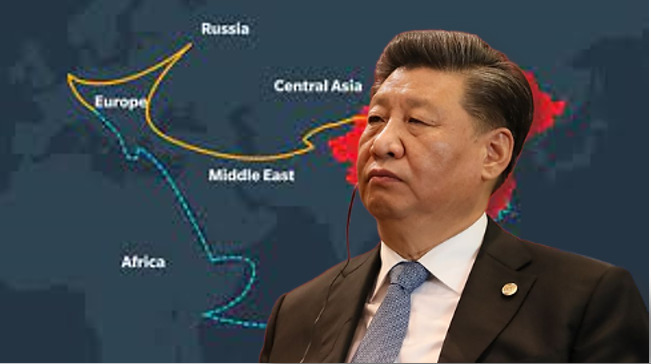 China has everything pre-planned. Beijing aspired for double-digit economic growth every year for the next decade or so. As it is palpable from every move, China is keen to overtake the United States of America as the world’s greatest economy by 2030. That target is currently considerably behind schedule. While the BRI was made a tool to undertake this economic neo-colonial take over of the capitalist world order, the companies which were sponsoring these agendas of Xi Jinping have lost all steam and are bankrupt by large.

As per reports, the China Overseas Security Group (COSG), which is affiliated with China’s People’s Liberation Army (PLA) has gone bankrupt. According to local media, the Chinese company COSG, which provided security for Belt and Road Initiative (BRI) projects in other countries, now faces financial challenges because most of the BRI projects on which it worked, turned out to be unprofitable.

Over a hundred countries have signed agreements with China to work together on BRI projects such as railways, ports, motorways, and other infrastructure. The Chinese President Xi Jinping-led regime announced it in 2013. China’s Belt and Road Initiative (BRI) has saddled a slew of LMICs with “hidden loans.” Furthermore, the projects are monopolized by China.

Early in his career in 2013, President Xi Jinping established the Belt and Road Initiative (BRI), which is a vast worldwide infrastructure program encompassing almost 140 nations and involving over $1 trillion in projects linked to energy, transportation, digital networks, and trade. The BRI is framed by Chinese officials as a “win-win” partnership centered purely on development and connectivity.

Read more: CCP wanted to make a bridge from China to Taiwan, it ended up building a ledge for people to jump from

Beijing has gone to great lengths to downplay the BRI’s geostrategic implications and its ties to the People’s Liberation Army. It has tried to play the benign image for a long time. However, after consolidating power further under his hands, Xi Jinping has become overtly colonialist and has shed the image games.

And now since the Pandemic, many governments have become worried about ulterior motives behind BRI projects, many of which have dual-use commercial-military capabilities and are increasingly connected to Chinese digital technologies and satellite systems. Now, with the current happenings, it turns out that these concerns were well placed.

China’s state-owned firms and banks are mostly involved in BRI investments. Corruption has grown as a result of China’s monopoly in lending and infrastructure construction. There is no competitive element in the program because there is no involvement from the commercial sector. The system is immensely unpopular because of debt-trap diplomacy, a lack of transparency, and excessive lending terms.

At least 236 BRI projects have run into financial difficulties due to debt. The majority of China’s connectivity projects were sold to countries that were looking to Beijing for the success of its economic model in infrastructure projects and wanted to follow in its footsteps, even if it was not economically viable for them. Furthermore, China has overcommitted and is now unable to sustain the aid program. In addition, China’s poor economic rate following the COVID-19 outbreak has resulted in a lack of finances.

COSG operates in many countries, including Pakistan, Turkey, Malaysia, Cambodia, Mozambique, South Africa, and Thailand. China is currently facing ire in an increasing number of nations spanning Africa, Asia, Latin America, and Central and Eastern Europe as a result of the Belt and Road Initiative. Some nations have decided to terminate high-profile BRI projects, while others have decided to reconsider whether the benefits of participating in the BRI outweigh the risks.