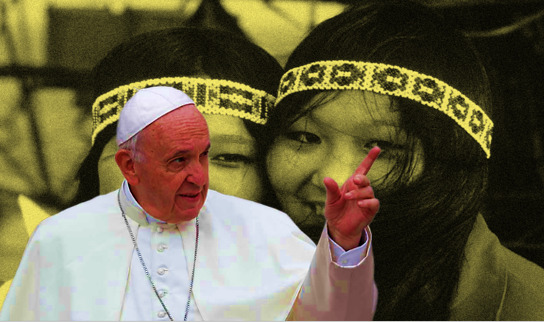 Indigenous leaders of Métis community from Canada and survivors of the country’s notorious residential schools met with Pope Francis recently and told him of the abuses they suffered at the hands of Catholic priests and school workers in Canada. They expect the Pope to apologize on behalf of the Catholic Church and its role in the residential school system. These people moved from pole to post, just to seek recognition for the plight that they have gone through for ages, even when Canada is often postered to be a humane paradise.

Metis is a multi-ancestral indigenous group of people whose homeland is in Canada and parts of the US. They imbibed a rich and beautiful culture that goes in harmony with the land, water, and animals. In order to create influence and assimilate this indigenous community into the dominant Christian culture, the residential school system was run between the late 1890s to mid-1900s. An estimated 1, 50,000 indigenous children attended the residential school system, mostly by force, from the late 1900s to 1996. The Catholic Church ran more than 60 percent of the schools

Students in these residential schools faced a multitude of abuses, both physical and sexual. They were kept away from their families, depriving them of their own indigenous culture. They were forced to learn French or the Canadian language. Fundamentally, Students were expected to adopt the mainstream culture. Also, due to poorly constructed and maintained facilities, deaths in residential schools were a common occurrence. The actual data of deaths went unreported. To much dismay, unmarked graves have been found at many former residential schools in Canada.

Gerald Antoine, a residential school survivor who traveled to Rome from the Northwest Territories in Canada said, “What has transpired is wrong. They [the Catholic Church] need to be accountable, “The churches in Canada, they’ve apologized; the only church that’s never apologized is the Roman Catholic.”

Acknowledgments of the wrongs done by the residential school system have been sought by this community over time. In a recent meeting, Pope Francis consoled these people and said that he is committed to the “journey of justice”. Following a meeting with Metis delegates, Metis National Council president Cassidy Caron said Pope Francis repeated “truth, justice and healing,” which she took as a personal commitment from him to find justice.

Pope Francis is expected to announce his commitment by making a trip to Canada, where he will apologize for the church’s role in these residential schools. This is a really big stance from the highest authority of the Catholic Church. The fact that these people had to go with their requests personally and we’re not provided the enormous state support, that they rightly deserve shows us how serious the current Trudeau administration is when it comes to his often proclaimed humanitarian values. They are not at all interested in providing support where it is much needed but are more inclined to provide empty words of encouragement as well as classic virtue signaling.