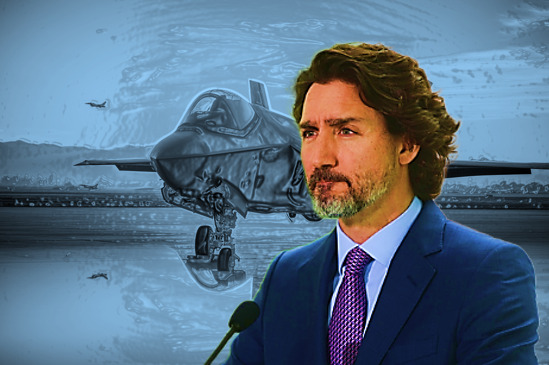 Canada has announced that it plans to buy 88 US-made F-35 stealth fighter jets and replace its aging CF-18 fleet.

Read more: Canada wanted to supply weapons to Ukraine, turns out it didn’t have any

Of course, Canada needs these new aircraft, given the Ukraine invasion and a growing China threat. But it may be too little, too late. And Trudeau is the one who ought to be blamed for the delay in the acquisition of F-35 fighter jets.

Canada’s Conservative Prime Minister Stephen Harper who stayed in office from 2006 to 2015 understood that his country needs F-35 fighter aircraft.

In 2010, the Harper government’s preliminary analysis found that the F-35 was most suited for Canada’s military requirements at the lowest life-cycle cost.

The Canadian government, therefore, decided that it would pursue a sole-source acquisition to avoid any cost escalation of a competition. It actually made a lot of sense, as Canada was a part of the Joint Strike Fighter program, and produced components and rendered services for nearly all F-35s built in the world.

How liberals delayed the acquisition

However, liberals in Canada didn’t allow the project to go ahead smoothly. During the 2011 federal elections, the liberals ran advertisements against Harper and described plans to purchase F-35 as too expensive and fiscally irresponsible.

Thereafter, adverse remarks by the Parliamentary Budget Officer and the Office of the Auditor-General forced the Harper government to junk the F-35 acquisition plan due to its high cost.

Finally, the government conducted an independent review by the National Fighter Procurement Secretariat in 2014, which led to the conclusion that F-35 was most suited for Canada. For a second time, Conservatives decided to equip the Royal Canadian Air Force with first-generation fighter jets.

However, the decision was put on hold due to the upcoming 2015 polls. But then, Justin Trudeau got elected and he made it a point to undermine the acquisition of F-35 aircraft.

How Trudeau deprived the Royal Canadian Air Force of F-35

During the 2015 polls, Trudeau-led Liberals vowed that they would not buy the F-35. They said they would purchase a less costly fighter jet that is more suited to Canada’s needs through a competition.

It seems that the Super Hornets were intended to ultimately replace the aging CF-18 fleet. However, Super Hornets turned out to be twice as expensive as F-35s.

Ultimately, Trudeau had to take an about-turn and settle for the F-35 only. Procurement Minister Filomena Tassi defended the decision and highlighted that the “process” was followed. She said, “It (process) drives the bidders, no matter what procurement you’re looking at, to come forward with their best possible bid.”

However, Trudeau’s delay tactics have actually created a huge capability gap in Canada’s fighter aircraft fleet. Earlier, Canada needed 65 F-35s and now it needs 88. For Trudeau, delaying the decision any longer was however untenable given the Russia-Ukraine crisis. Yet, his policies have reduced the Canadian air force into an incompetent, ineffective military force.