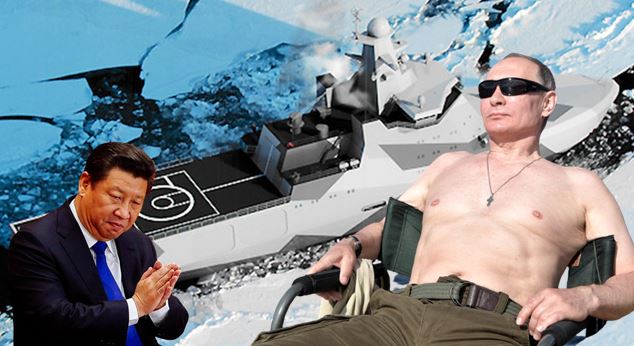 The Russian Federation under the leadership of Vladimir Putin has been looking at ways to make use of melting ice in the Arctic and by doing so, it wants to create a trade route totally dominated by Russia. Now, Russia’s top admirals are apparently considering forming a totally new branch of the Navy to focus on the battle in the icy Arctic, where diminishing sea ice has provided merchant ships with unparalleled chances. “The subject of establishing the Russian Arctic Fleet as a new structure is being looked into,” a source told Moscow’s TASS on Thursday. It would be a separate naval unit tasked with guaranteeing the safety of the Northern Sea Route and the Arctic coast, which are currently under the control of the Northern and Pacific Fleets.

This development has literally shattered China’s dreams of building an Arctic Nuclear Base. The new detachment, according to the anonymous official, will be able to focus on the increasingly tense region, freeing up other forces to focus on their combat missions. It would be made up of ships transferred from other locations at first, but “in the future, it would be supplemented with ships and unique equipment for Arctic performance.”

China’s increasing activities in the Antarctic

In recent years, China has expanded its considerable influence over regions that Russia considers to be its spheres of influence. This, along with the many accounts of technological theft accusations and military build-up along the Russian far-east, has increased tensions in the partnerships. While things had soured enough already, the outbreak of the Chinese virus didn’t bode well for the relations. China, while the world still suffers from its virus, has now turned towards the Antarctic to resume its expansionist policies on the continent. But there is just one issue, Russian interests and presence which is increasing in the Southern Ocean.

Read more: Russia knows China’s ways from its conduct in the Arctic and it will counter China not just there but also in Antarctic.

China sees itself increasingly as a major ocean power. While it is already feeding on Russian control of the arctic, it has an eye out for the Antarctic too. China has begun its expansionism and it has gone down straight with all the tools it needs.

Russia does not like foreign powers interfering with its domestic issues, and neither does it like them intruding into its neighbourhood. Take for instance Central Asia, Eastern Europe and the Arctic – these are all regions that Russia views as its exclusive spheres of influence and as such, expects other world powers to maintain a safe distance from them. However, there are certain privileged countries that have access to Russian exclusive spheres of influence. They are allowed to invest in and set up interests in these regions. India and Japan are among these privileged countries.

TFI has already reported how Japan is being allowed to invest in the Russian Far East by means of jointly developing the Sakhalin Island. Now, Russia is looking to bring in India to invest in the Arctic and is nudging it to buy gas and oil fields in the region which a few years down the line, will become a critical global passageway subsequent to the polar ice cap melting. According to a report by Business Standard, India is in talks with Russia for a fresh investment of at least $2-3 billion in its upstream assets. According to officials in the know, the Russian government has offered some oil and gas fields to ONGC Videsh (OVL).

China’s attempts in the Arctic

Moscow is resurrecting the Russian Navy, which was dismantled after the Cold War and the collapse of the Soviet Union due to a shortage of warm-water ports and naval facilities. In fact, Russia is constructing a fleet of warships capable of dealing with a future conflict with China in the Arctic. The Russian Navy will acquire roughly 40 warships and vessels of various classes this year, according to Vladimir Pospelov, a member of the Russian government’s Military-Industrial Commission.

Global warming has produced a booming new marine highway for trade and transportation as ice covers less and less of the region’s seas each year. By 2024, Moscow expects at least 80 million tonnes of cargo to pass over the icy waters, cutting travel times between northern Europe and Asia in half. When the Suez Canal was temporarily closed due to a container ship blocking the waterway, the country promoted the route as an alternative.

In recent months, Russian Authority has conducted a series of military drills in the Arctic, including sending a detachment of boats and amphibious landing ships to participate in exercises on islands off Siberia’s northern shore. And by these decisions, Russia has shattered China’s Arctic ambitions while securing its position nonetheless.