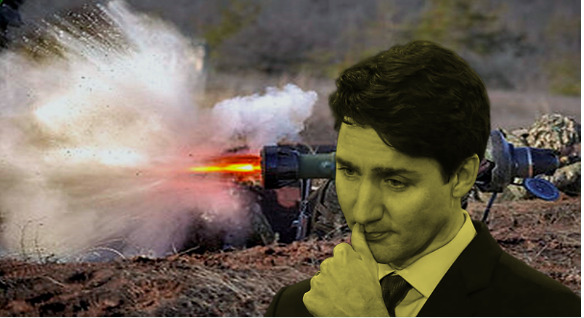 Trudeau has transferred a large portion of Canada’s military assets to Ukraine. The situation is so dire that any more weapon sales to Ukraine will see the Canadian military going severely under-equipped.

So, basically in a bid to appease Biden amidst the ongoing Ukraine crisis, Trudeau has made Canada vulnerable.

Canada is at the bottom end of NATO countries in terms of military spending and doesn’t boast of a particularly vast military force. Yet, it sent 4,500 M72 rocket launchers, 7,500 hand grenades, around 1,600 fragmentation vests, 100 Carl Gustav M2 recoilless rifles along with 2,000 rounds of ammunition and $7 million worth of machine guns, sniper rifles, pistols, and carbines along with 1.5 million rounds of ammunition.

Apart from the generosity, the problem is that Canada doesn’t really afford to spend so much on military equipment.

Canada runs out of weapons

In fact, Trudeau has been on a campaign to defund his country’s armed forces.

To be fair, Canada never spent heavily on its defense forces. It has a long history of pacifism free of any major wars. Apart from participating in US-led multinational coalitions, Canada hasn’t carried out any military operations.

However, times are changing. The Arctic is melting and Russia is looking at the militarization of the resource-rich region. Also, Canada is the second-biggest country in the world and has three long coastlines to guard.

Even if Trudeau does spend this money at some point of time in the future, the cost overruns and inflationary changes will mean that some of the planned military investments will have to be scrapped.

Presently, Canada’s military expenditure is way below NATO’s suggested threshold of 2% of the GDP. Anita Anand said that she would advise the Trudeau government to hike it from the present 1.39%. However, the reality is that even if the 2017 defense program is executed, Canada’s military spending would go up to only 1.5% of the country’s GDP.

Canada’s military forces are currently facing a lack of everything including warplanes, warships, and even military personnel and to add more salt to injury, Trudeau just snatched the weapons of Canadian soldiers and handed them to Ukraine.