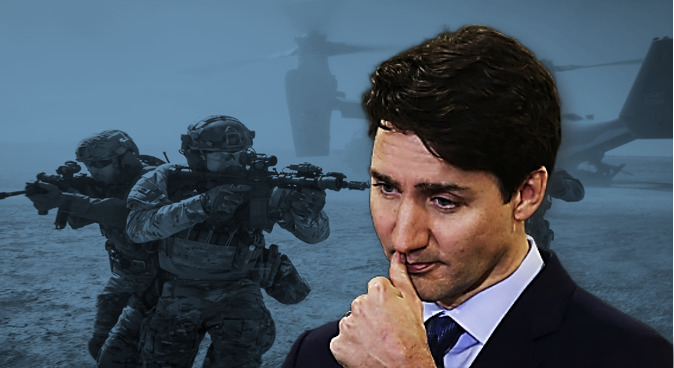 Ever since Ukraine got invaded, European countries found an imperative to strengthen their defense forces. So, Poland is spending more on its defense much like Germany and Sweden.

In North America, Canada too must protect its sovereignty and integrity. However, Trudeau won’t spend on Canada’s deficient military forces. In fact, he has been delaying military spending even as NATO falls apart.

How deficient are Canada’s military forces?

Truth be told, Canada is extremely vulnerable. It has the second largest national landmass in the world with a population of 36 million. Also, it abuts three oceans and has vast waterways to guard. Yet, Canadian armed forces have a total strength of just 67,000 personnel. Only a small fraction of these forces are trained for combat and warfighting. Canada is way behind other NATO countries and non-NATO allies in terms of the military-to-general population.

No other G7 country has a military force as small as Canada’s. Even Japan, a much smaller country with a Pacifist Constitution, has a bigger military force than Canada’s military. Canadian Naval and Army commanders admit that they face considerable personnel shortfalls. Add to it, the inordinate delay in procuring a new fighter jet for the Royal Canadian Air Force (RCAF). So, we are talking about a grossly deficient military force.

Why Canada doesn’t have a big military force?

It is natural for Canada to have a small military force. Modern Canada never went to war on its own and only participated in military operations as a part of large multinational coalitions. Recently, Canada came to a standstill over the ‘Freedom Convoy’ movement which is a testimony to how Canada’s history of peaceful existence without any combat experience leaves it inept to handle such tricky situations.

Apart from two former PMs- Louis St. Laurent and Brian Mulroney, no one spent above the 2 percent of GDP level on the military, as required by a NATO Heads of Government meeting in Wales. To make matters worse, Canada became a part of the US security umbrella after the Second World War. As a NATO member, it thought that US troops will protect it against external aggression. This myth however got shattered recently as Russian tanks rolled into Ukrainian territory. However, Justin Trudeau keeps looking the other way.

Justin Trudeau came to power in 2015 and hasn’t focused on expanding Canadian armed forces to date. Recently, Trudeau was touring Europe in a bid to express solidarity with Canada’s NATO allies. Back home, it was pointed out that his government has so far “underspent” $10 billion of the $164 billion it promised to spend for 348 projects, including replacement of aging warships, fighter aircraft, and military vehicles from 2017-18 to 2036-37.

And make no mistake, Canada does face an imminent threat in the Arctic. Russia is quite enthusiastic about power projection in the Arctic, which is melting very quickly and is bound to open up for shipping and exploration activities. What if Canada and Russia face off in the Arctic? Will Canada rely on NATO? What if NATO tells Canada that it isn’t going to work outside the Atlantic? Or still worse, the US tells Canada that it can’t join the war to avoid the Third World War.

Read more: Russia seals its authority over the Arctic with a $110 billion mega-port on the Taymyr peninsula

Canada and the US do have a joint air force command called the North American Aerospace Defense Command (NORAD). It is supposed to protect the two countries from aerial attack and invasion by adversary forces. The NORAD is active in the Arctic too. But again Canada’s limited participation in the US missile-defense program is a major irritant that may leave  NORAD getting undermined.

Trudeau is behaving like Biden’s puppet and the Canadian armed forces are the biggest victim of his disastrous policies. Canadians must ramp up their defenses or else they could face an existential crisis.