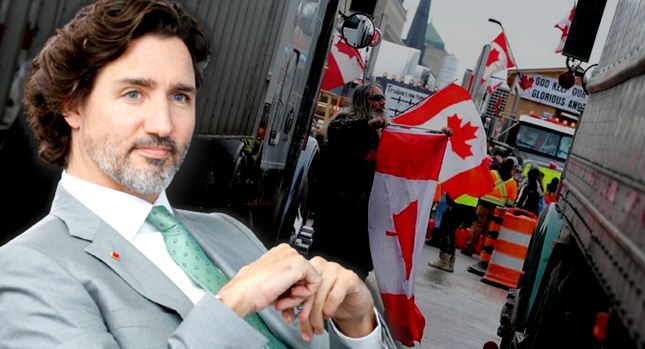 Canadian PM Justin Trudeau has been on a suicide mission since the start of the truckers protest. The ongoing Canadian truckers and transporters protest rally has brought into limelight the Trudeau administrations fake admiration for democracy and free speech. The government first tried to block the funds and donations of the protesters and when caught red-handed, they took an extreme step of imposing a national emergency.

With the emergency in place, the Trudeau administration has got a free hand to punish and hound people who donated to the protest.

Hacking of the donation and funding sites

In a recent incident, the crowdfunding site GiveSendGo, which raised money for the Canadian Freedom Convoy, was taken offline after a reported hack. The hack also included leaking donors’ personal information. After being hacked, the users who tried to visit the site were redirected to a separate domain – GiveSendGone.wtf. Interestingly, it showed a video loop from the Disney film Frozen. The video included captions criticizing the site and its donors as “grifters and hatriots” who were using the platform to “fund an insurrection”.

According to the Verge, the names, email addresses, ZIP codes, and country of origin of some 93,000 donors was leaked to a hosting website called “Distributed Denial of Secrets”. More than half of the donors are based in the United States.

GiveSendGo released a statement saying that it “was attacked by malicious actors” on Sunday who was “attempting to eliminate the ability of its users to raise funds”. “There was a broadcasted breach showing one such actor illegally hacking into GiveSendGo and distributing the names and emails of the donors from the Freedom Convoy Campaign”.

The hacker who leaked the names and locations of more than 90,000 donors has said that the hacking was done to expose how money from abroad had funded “extremism” in the country. According to the hacker, Canada was “not safe from foreign political manipulation”. “You see a huge amount of money that isn’t even coming from Canada – that’s plain as day,” said the hacker. The leaked data showed that more than 90,000 donations were made via GiveSendGo, with most funds appearing to come from Canada and the US. According to the data, individuals in countries including the UK, the Netherlands, Ireland and Denmark also donated to the protest.

After freezing the donations of Canadian’s on the GoFundMe platform, the hacking of GiveSendGo signals the involvement of the Trudeau administration at play. In the face of an emergency, the government doesn’t require any court order to freeze the bank accounts of citizens. The administration has also started suspending the vehicle insurance of anyone who is involved in the protest rallies.

The way GiveSendGo was hacked and how the protesters and donors were tagged as extremists and terrorists show that the hacker is for sure having the governments backing. Last time Trudeau administration faced a lot of backlashes, when it made a move to freeze funds on GoFundMe, ergo this time they have decided to use private hackers as cannon fodder as Trudeau doesn’t want any more tirades directed at him.