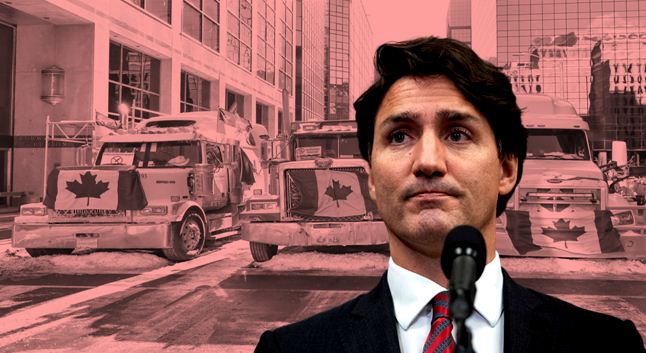 The Canadian PM Justin Trudeau, who was hiding at some unknown location since the rise of the truckers protest has now come out with punitive measures against the protesters. Till now, he was just trying to suppress and silence the voices of truckers but now has revealed his true colours by declaring a national emergency for the second time in Canadian history.

What does Trudeau say?

During a recent interaction with the reporters, Trudeau said, “Those people who disagree with the measures that governments put in place to keep Canadians safe … have gone from protesting and disagreeing with those measures to limiting and blocking the freedoms of their fellow citizens, hurting jobs, hurting lives and livelihoods, endangering public safety, and weakening our country. These illegal blockades are hurting Canadians, and they need to stop”.

When asked if the Emergencies Act could worsen the situation, He replied, “Every step of the way, we have been there to support the police of jurisdiction. We’ve been there with tools & resources to help end these blockades. But it is clear that there are more tools necessary”.

He further said, “This is about keeping Canadians safe, protecting people’s jobs. The police would be given more tools to imprison or fine protesters and protect critical infrastructure”.

Trudeau declared the emergency on the same day when Ontario, announced that it would stop requiring vaccine passports starting March 1. The emergency empowers the government to restrict travel, public assembly, and “the use of specified property” and to compel “any person to render essential services” in return for “reasonable compensation.”

The Emergencies Act, which replaced the War Measures Act in 1988, has never been invoked before.

Trudeau’s father, former Prime Minister Pierre Trudeau, invoked the War Measures Act during peacetime for the first and only time in the country’s history after Québécois terrorists kidnapped Quebec’s deputy premier in 1970. According to CBC, the emergency “allowed police searches and arrests without warrants and prolonged detentions without the right to see a lawyer.”

Trudeau is only the second PM (after his father) in the history of Canada, to implement a national emergency during peacetime. By adopting the policies of his father, Trudeau is stamping the truckers and other protesters as terrorists.

In another authoritarian and undemocratic step to punish the protesters and truckers, the Trudeau administration has decided to freeze the personal accounts of the people involved in the protests and rallies. In the face of an emergency, the government will not require any court order to force banks to freeze the accounts of the people. Also, the government will suspend the vehicle insurance of anyone who is involved in the protest rallies.

Critics of this authoritarian step

The Canadian Civil Liberties Association has disagreed, warning that the move threatens our democracy and our civil liberties. Ottawa protest leader Tamara Lich dismissed Trudeau’s move saying, “There are no threats that will frighten us. We will hold the line”.

The premiers of Quebec, Manitoba, Alberta and Saskatchewan said “The emergency powers were not needed in their regions”. Before Trudeau’s announcement, Quebec Premier Francois Legault said, “Invoking the Emergencies Act could throw oil on the fire”.

Critics have noted that the prime minister once voiced support for farmers in India who blocked major highways to New Delhi for a year in 2021, saying at the time: “Canada will always be there to defend the right of peaceful protest”.

First, Trudeau forced his strict COVID restrictions onto the Canadian people. He then moved further in imposing his vaccine mandate onto the Canadian truckers and transporters. When the people started protesting against his policies, he ran away and took shelter in an unknown location. He tried to suppress and silence the protester’s voices by cutting off their financial support through crowdfunding and donation sites. And now, when all of his policies seem to be failing, he has metamorphosed into a dictatorial leader.